The Adani group will operate, manage and develop the five airports and will also fund any future development.

NEW DELHI: Gautam Adani-led Adani Enterprises on Monday forayed into the aviation sector winning the bids to operate five state-run airports on a public-private partnership basis for the next 50 years.

According to the Airports Authority of India (AAI), the Adani group emerged as the highest bidder for Ahmedabad, Jaipur, Mangaluru, Thiruvananthapuram and Lucknow airports. These are part of the six airports put up for privatisation by the government in November last year.

An estimated 25 million passengers, both domestic and international, flew through the five airports in 2017-18. Footfall is expected to rise exponentially in the coming years.

The bids for the Guwahati airport are likely to be opened on Tuesday and the group is expected to bag it, too. According to the AAI, the Adani group was found to be very “aggressive” in bidding while competing bids seemed to be quite weak.

A comparison of bids showed that the Adani group offered more than double the per-passenger fees offered by GMR Airports Limited, which runs the Delhi and Hyderabad airports. For the Ahmedabad airport, which is the largest among the five airports with 9.2 million passengers flying through it in 2017-18, the Adanis offered Rs 177 per passenger while the GMR bid was Rs 85.

The AAI chose the winner on the basis of a monthly per-passenger fee that the concessionaire will offer to it. This is a departure from the revenue-sharing model that the AAI had adopted in the existing privatised airports such as Delhi, Mumbai, and Bengaluru.

A total of 32 technical bids were received from 10 companies to operate the six airports, which are currently under the AAI’s management.

Bids were sought for the operation and management of existing airport assets as well as their upgradation and development of additional air-side terminals, city-side and land-side infrastructure for 50 years for the six airports under a single-stage bidding process.

The Ahmedabad and Jaipur airports received seven bids each. Those at Lucknow and Guwahati received six bids each. Mangaluru and Thiruvananthapuram received three bids each.

The idea of airport development, operation, and management through PPP was conceived during the UPA-II regime in 2013. However, it did not take off due to lack of consensus among different agencies including the erstwhile Planning Commission and also because the 2014 elections were on the horizon. 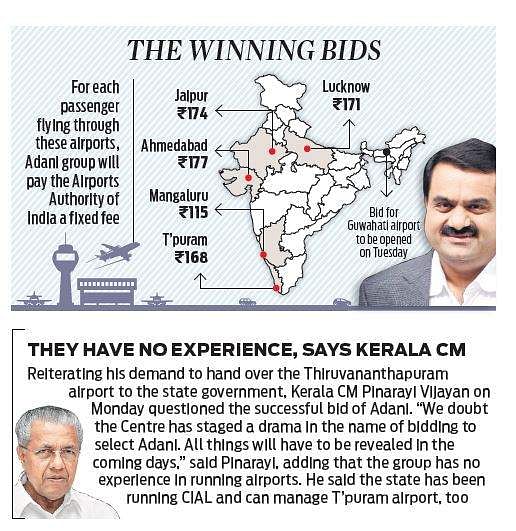 Stay up to date on all the latest Nation news with The New Indian Express App. Download now
(Get the news that matters from New Indian Express on WhatsApp. Click this link and hit 'Click to Subscribe'. Follow the instructions after that.)
TAGS
Adani Airports