Payback for Pulwama: India takes out '350 terrorists' in Balakot

12 Mirage 2000 fighter jets from the IAF struck a major Jaish-e-Mohammad (JeM) camp across the LoC at 3.30 am and destroyed it, the Indian foreign secretary confirmed on Tuesday morning.

The pre-dawn operation saw 1000 kg bombs being dropped to target the camp that the foreign secretary Vijay Gokhale said was situated on a hilltop in a jungle in Balakot.

Maulana Yusuf Azhar alias Ustad Ghauri, the brother-in-law of JeM chief Masood Azhar, was said to be in charge of the camp where suicide bombers were being prepared to launch the next wave of attacks on India. Over 300 terrorists including Yusuf Azhar,  were reportedly "sitting duck targets" in the bombing.

"The selection of the target was also conditioned by our desire to avoid civilian casualties. It's located in a deep forest on a hilltop," Gokhale underlined.

The attack was termed a "non-military pre-emptive strike" by Gokhale who hoped that Pakistan will now live up to its promise of fighting terror and destroy the remaining infrastructure of the terror groups.

Earlier, flight-tracking websites had spotted heightened activity along the border with an IAF early warning plane Emb 145 and mid-air refueller circling the area early in the morning.

The attack comes in the wake of the suicide bombing attack on a Central Reserve Police Force (CRPF) convoy in Pulwama on February 14 that killed 40 jawans.

The attack was claimed by Pakistan-based militant group, Jaish-e-Mohammad (JeM), and prompted a spike in tensions between the two nuclear-armed neighbours.

A 20-minute operation by IAF

The operation by the IAF including takeoff and return time took only 20 minutes, say media reports. The last time the IAF had crossed the LoC with Mirage aircraft was during the 1971 war.

According to reports, Pakistan scrambled its F16s to take on the IAF Mirage jets but had to turn back due to the size of the IAF formation coordinated by the Western Air Command. 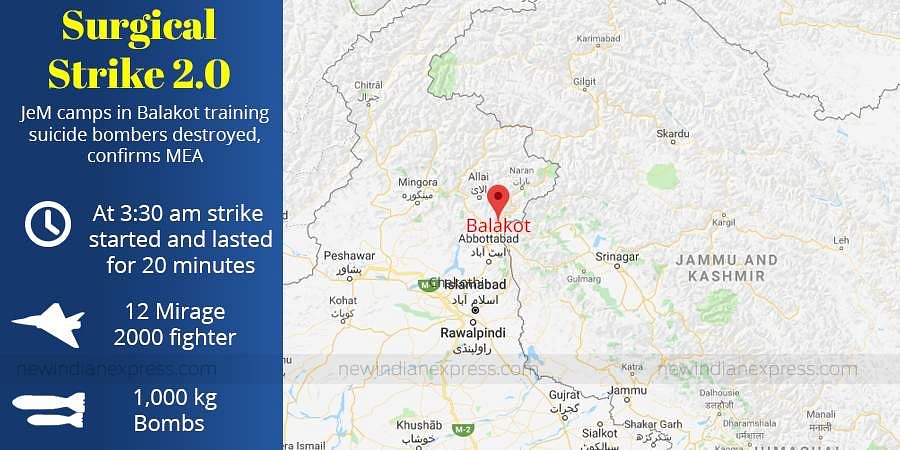 Pakistan Foreign Minister Shah Mahmood Qureshi on Tuesday said India has committed "aggression" by violating the LoC and Islamabad has "right to respond".

Meanwhile, Prime Minister Imran Khan convened an emergency meeting to review the emerging situation in the wake of the Indian Air Force's (IAF) violation of the Line of Control, Radio Pakistan reported.

Interestingly, Pakistan army spokesperson Major General Asif Ghafoor was the first to officially confirm that the Indian Air Force has intruded from the Muzaffarabad sector. However, he denied that there was an attack on any Pakistani infrastructure.

He further said, "Indian aircrafts’ intrusion across LOC in Muzaffarabad Sector within AJ&K (as the Pakistanis call the area) was 3-4 miles. Under forced hasty withdrawal aircrafts released payload which had free fall in open area. No infrastructure got hit, no casualties. Technical details and other important information to follow."

Pakistan's President Arif Alvi says India has created "hysteria" in the wake of this month's attack on Indian troops in the disputed Kashmir region.

The strike in Balakot is significant as it was not merely an LoC violation but a punitive action inside Pakistani territory.

CNN News 18 has reported that the attack could have caused casualties of 200-300.

Congress chief Rahul Gandhi was one of the first to congratulate the IAF. He said, "I salute the pilots of the IAF."

I salute the pilots of the IAF.

Subramanian Swamy said, "Actually it was mostly on our own territory, which is called PoK- Pakistan Occupied Kashmir. So you can always bomb your own territory, nothing wrong. Even if it was their territory, we have under the United Nation charter the right of self-defence. They have been attacking us & they say we want to give a thousand cuts to India, so our government did the right thing by giving them 1000 bombs."

Subramanian Swamy: Even if it was their territory, we have under the United Nation charter the right of self-defence. They have been attacking us & they say we want to give a thousand cuts to India, so our government did the right thing by giving them 1000 bombs. https://t.co/t1N22SzLHS

If this is Balakote in KPK it’s a major incursion & a significant strike by IAF planes. However, if it’s Balakote in Poonch sector, along the LoC it’s a largely symbolic strike because at this time of the year forward launch pads & militant camps are empty & non-functional.

If this is Balakote in KPK it’s a major incursion & a significant strike by IAF planes. However if it’s Balakote in Poonch sector, along the LoC it’s a largely symbolic strike because at this time of the year forward launch pads & militant camps are empty & non-functional.

Union HRD Minister Prakash Javadekar Tuesday hailed the air strikes carried out by the Indian Air Force inside Pakistan. "It was a necessary step required for the security of the country...it was an act of maha parakram (mightily act)," he said.

CPI(M) general secretary Sitaram Yechury said that the air strikes on Balakote in Pakistan were effective and successful as per his knowledge. He also said that he will know more about the surgical strike in the all-party meeting called today evening by the government.

Stay up to date on all the latest Nation news with The New Indian Express App. Download now
(Get the news that matters from New Indian Express on WhatsApp. Click this link and hit 'Click to Subscribe'. Follow the instructions after that.)
TAGS
IAF Mirage 200 fighter jets Mirage 2000 LoC Pakistan terrorist camp IAF air strike air strike Payback for Pulwama Surgical strike 2