The ‘No Food’ option was launched for 74 premium trains in June 2016. Since then, according to a response to an RTI, over 40 lakh passengers had availed it till December 2018.

NEW DELHI:  Passengers of some of the most premium trains of the Indian Railways, including the Mumbai-Karmali Tejas Express and Hazrat Nizamuddin-Jhansi Gatimaan Express which offer multi-cuisine food sourced from some of the best kitchens in the country, have opted for the ‘No Food’ option during their journeys.

The ‘No Food’ option was launched for 74 premium trains in June 2016. Since then, according to a response to an RTI, over 40 lakh passengers had availed it till December 2018. The August Kranti Mumbai-Hazrat Nizamuddin Rajdhani train, which has high demand among travellers between the two metros, saw the highest number passengers opting to do away with food. Around 1.91 lakh passengers said no to food served by the Railways. 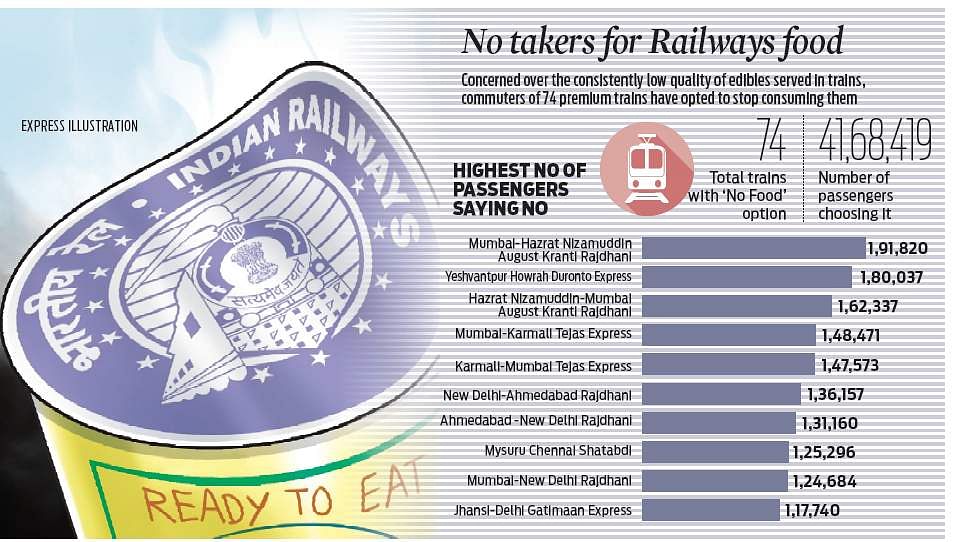 A CAG report in 2017 had highlighted that the food sold at railway stations is “unfit for human consumption” and hygiene standards at railway catering units are below par as some food items were found to be stale and expired.

According to the Indian Railways, the facility was launched keeping in mind the benefit of those passengers who prefer to carry their own food or order through the e-catering service started by the IRCTC.  Passengers however, feel the quality has been deteriorating.

“I wish the Indian Railways would start the ‘No Food’ option in all premium trains. Why am I being forced to pay for food which is stale and unhygienic?” said Ravi Gupta, a passenger who frequently travels on the Delhi-Amritsar Shatabdi.   Till October 2018 this year, the Railways has received a total of 7,529 complaints imposed fines worth `1.55 crore on vendors.

Stay up to date on all the latest Nation news with The New Indian Express App. Download now
TAGS
Premium Train riders IRCTC Food on Trains