This reservation will be over and above the existing 50 per cent reservation, they said.

NEW DELHI: Having faced electoral reverses in regions considered to be key catchment areas of the BJP, the Centre on Monday sprang a 10% reservation surprise for economically weaker sections. A Constitution amendment bill to give shape to this quota is set to be tabled in the Lok Sabha on Tuesday, the last day of the winter session, even as the government extended the Rajya Sabha by a day.

Although aimed at reserving 10% seats in Central government jobs and educational institutions for the economically weaker sections, the quota will mainly benefit the upper castes, a section that has been the BJP’s main vote bank but has recently been grumpy.In UP, the quota is seen as an attempt to blunt the SP-BSP alliance, where the BJP is eyeing the 21% upper caste votes.

READ | 10 per cent reservation for economically backward upper castes: Here is whom it will benefit

The upper caste anger, particularly after the government recently overturned a Supreme Court judgment that ordered certain safeguards against arrests made under the Scheduled Castes and Scheduled Tribes Atrocities Act, had a direct fallout in the recent Assembly elections in Madhya Pradesh, Rajasthan and Chhattisgarh.

In Madhya Pradesh, the BJP is said to have suffered reverses in 25-30 Assembly seats, mainly in the Gwalior-Chambal belt. A large section of the upper castes are also angry with it in Rajasthan.In Uttar Pradesh, several upper caste organisations belonging to the Vaishyas, Brahmins and Thakurs, had opposed the SC/ST amendment bill and even called a bandh. There were also open voices of dissent from some party leaders.

Brahmins, accounting for 10% in UP and 6% in Bihar, are also upset as the BJP has not given them much representation in the Cabinet and the party. Kalraj Mishra was the last prominent Brahmin face in the Modi Cabinet but was eased out after he turned 75. UP and Bihar together have 120 Lok Sabha seats.The upper caste quota push is being seen within the party as an attempt at social engineering with the BJP eyeing non-Yadav OBCs, non-Jatav Dalits and the general category voters.

However, the quota could be challenged in a court of law. There is already 49.5% quota for jobs and seats in educational institutions. An additional 10 per cent on account of economic backwardness may not pass judicial muster.

As per the legal requirement, backwardness cannot be judged by any single criterion, including economic backwardness. It has to be judged from a community’s social and educational backwardness.In 2015, the Supreme Court struck down a UPA notification categorising Jats as a BC for providing reservation.

Flip side of opening  aspirational basket

Critiquing the quota criteria, an analyst felt it is unlikely to hugely benefit the section it is aimed at. For, it applies to an individual with annual income of up to Rs 8 lakh, which works out to Rs 67,000 a month. With the bar set so high, there will be too many candidates but too few jobs, he reasoned 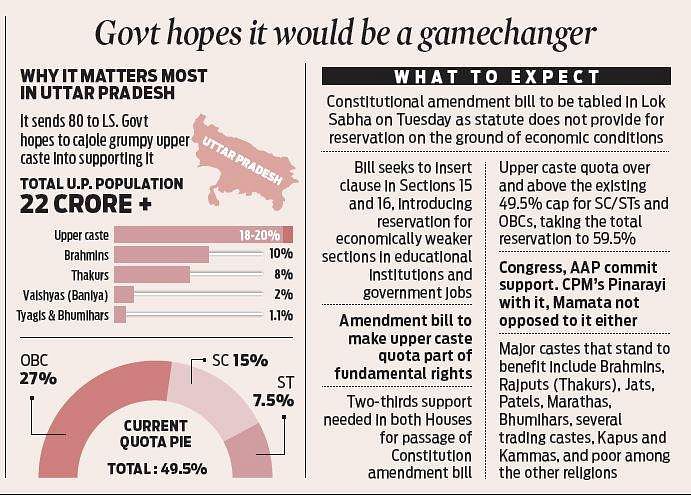