Ever since it launched the Swachh Bharat Mission (SBM) on October 2, 2014, the government has built 9.07 crore household toilets in rural areas.

SHEOPUR (MP): Ever since it launched the Swachh Bharat Mission (SBM) on October 2, 2014, the government has built 9.07 crore household toilets in rural areas. Over Rs 1,300 crore has been spent on the awareness drive to teach people about the need for using toilets.

But ground realities indicate the money is going down the drain in many areas. While the expenditures on building toilets and awareness campaigns have consistently increased, the toilets built under SBM (Gramin) remain merely brick enclosures in many villages. 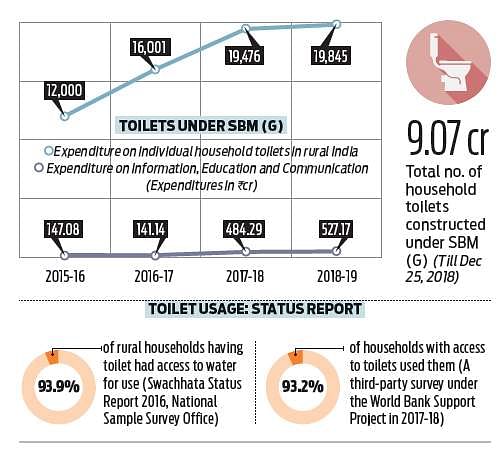 During a recent visit to Sheopur district in Madhya Pradesh, this correspondent found toilets being used as storehouses in some villages. At other places, they were simply abandoned, with dogs and cattle resting inside.

In Kalmi village, people complained of lack of water as the main reason for not using toilets. “We don’t have water to cook meal, how can we use toilets?” said one villager.

Similar reports keep coming in from various other part of the country. The issue has been raised several times in Parliament as well. Recently, it was pointed out that toilets constructed in many villages that were declared ‘open defecation free’ had no seats and water facilities. The government in its reply said, “Sanitation is a State subject and hence the responsibility for implementation of the programme lies with the States. Government of India provides technical and financial support to supplement the efforts of the State Governments. Complaints, if any, are forwarded to the respective State Governments for appropriate corrective measures.”

An official of the Ministry of Drinking Water and Sanitation said cleanliness was a behavioural issue and involved change of mindset to make people stop defecating in the open and adopt safe sanitation practices.

The awareness campaigns are intended to do precisely that — change mindsets. The official said massive media campaigns have been carried out at national level and cleanliness drives and awareness campaigns are held at regular intervals. “A Swachh Bharat Whatsapp group has been created. A Facebook page for SBM(G) has been created, twitter handles are also active. Celebrities have been roped in as brand ambassadors,” added the official.