Artificial Intelligence will be used by the Integrated Command and Control Centre of the police wherein the security personnel can see the visuals of crowd movement and assess the crowd size.

LUCKNOW: In a first, Kumbh Mela- the largest religious gathering on earth- will witness the use of artificial intelligence for better crowd management this year.

The 2019 Kumbh Mela will commence in Prayagraj city of Uttar Pradesh from January 15 till March 4.

"This will be for the first time that Artificial Intelligence (AI) will be used in Kumbh Mela. Over 1,000 CCTV cameras will be used to monitor various movements across the Mela area spread across 3,200 hectares," UP Additional Chief Secretary Awanish Awasthi told PTI Tuesday.

Artificial Intelligence will be used by the Integrated Command and Control Centre of the police wherein the security personnel can see the visuals of crowd movement and assess the crowd size.

At the same time, they can also monitor anything which is suspicious, he said. 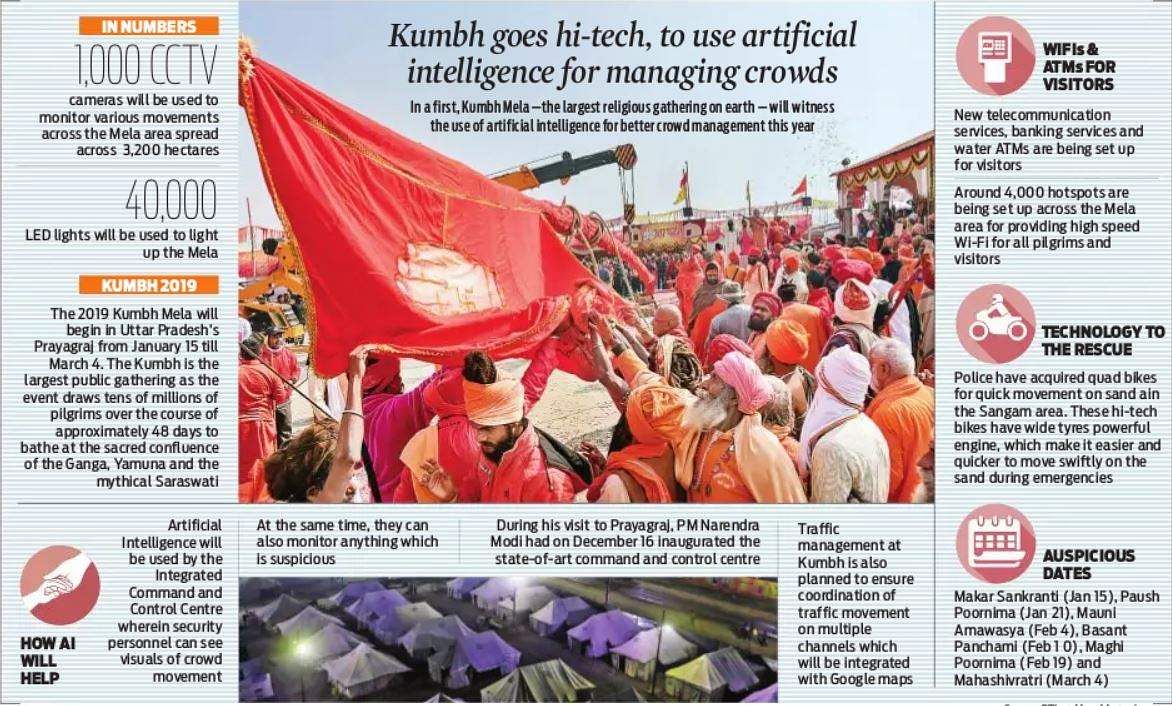 Artificial Intelligence is a way of making a computer, a computer-controlled robot, or a software think intelligently, in a similar manner humans think.

During his visit to Prayagraj, Prime Minister Narendra Modi had on December 16 inaugurated the state-of-art command and control centre.

Traffic management at Kumbh is also planned to ensure coordination of traffic movement on multiple channels which will be integrated with Google maps.

In order to facilitate the visitors, deployment of new telecommunication services, banking services and water ATMs are being carried out for the entire Mela area, officials said.

The Kumbh Mela, or the festival of the sacred pitcher, is the largest public gathering as the event draws tens of millions of pilgrims over the course of approximately 48 days to bathe at the sacred confluence of the Ganga, Yamuna and the mythical Saraswati.

The Mela area will also be lit by setting up more than 40,000 LED lights.