In a Facebook post, the outspoken Faesal said he had received storm of abuse and adulation over his decision to quit government service.

SRINAGAR: Amid reports that he is all set to join a regional party and contest the forthcoming parliamentary elections, 35-year-old Shah Faesal who quit the Indian Administrative Services (IAS) to protest unabated killings in Jammu and Kashmir (J&K), has said his next course of action would depend on what the people of the state, especially youngsters, want him to do. 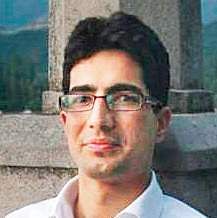 Faesal resigned on Wednesday. “As of now I have quit the service. What I am going to do hereafter also depends on what people of Kashmiri want me to do. More so the youth. I have an idea how I can do it. I am sure you have ideas too and you want me to factor those ideas in before I take a final decision,” he said.

“If you are ready to come out of Facebook/Twitter and show up in Srinagar tomorrow (Friday), we could think this through together. My choice of politics will be decided by real people not FB likes and comments,” Faesal said.

Later, in another Facebook post, he said due to the adverse weather forecast for Friday, the proposed interaction in Srinagar stood postponed.

Stay up to date on all the latest Nation news with The New Indian Express App. Download now
TAGS
shah faesal