According to the Ministry of Environment, Forest and Climate Change, the NCAP will be a mid-term, five-year action plan with 2019 as the first year.

NEW DELHI: The environment ministry launched the National Clean Air Action Plan on Thursday with a target of reducing particulate matter in 102 Indian cities by 20-30 per cent by 2024 at a cost of Rs 300 crore.

According to the Ministry of Environment, Forest and Climate Change, the NCAP will be a mid-term, five-year action plan with 2019 as the first year.

“The international experiences and national studies indicate that significant outcome in terms of air pollution initiatives are visible only in the long-term, and hence the programme may be further extended to a longer time horizon after a mid-term review of the outcomes,” said Environment Minister Harsh Vardhan. 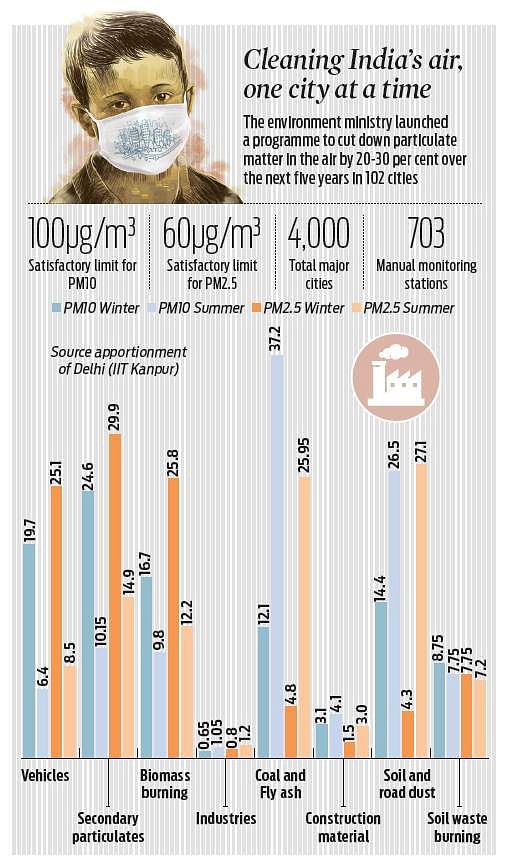 Taking into account the available experience and studies, the tentative national level target of 20-30 per cent reduction of PM2.5 and PM10 concentration by 2024 is proposed under the NCAP taking 2017 as the base year for the comparison of concentration.

“The overall objective of the NCAP is comprehensive mitigation action for prevention, control and abatement of air pollution besides augmenting the air quality monitoring network across the country and strengthening the awareness and capacity building activities.” the minister further added.

Collaborative and participatory approach involving relevant central ministries, state governments, local bodies and other stakeholders with a focus on all sources of pollution forms the crux of the programme.

There are plans to use the government’s ‘Smart Cities’ programme to launch the NCAP in the 43 cities in the list of the 102 non-attainment cities. City-specific action plans are being formulated for 102 non-attainment cities identified for implementing mitigation actions under NCAP. Cities have already prepared action plans in consultation with the Central Pollution Control Board (CPCB).

The institutional framework at the Centre and state level, comprising of an apex Committee at the ministry and at Chief Secretary level in the states, are to be constituted. North India has been reeling under a heavy blanket of smoke from two months.