The Ministry of Home Affairs (MHA) has sanctioned 99 new posts for the high security Burail Jail because it is currently under-staffed for.

The Ministry of Home Affairs (MHA) has sanctioned 99 new posts for the high security Burail Jail because it is currently under-staffed for. Among the present staff strength of 153, 103 are permanent staff while 50 others are temporary workers. The Chandigarh prisons department was demanding an additional 153 posts from the MHA, but the ministry seems to have agreed to only on 99 posts. The R C Gupta Committee, headed by former a Delhi Police Commissioner, which was formed to find out lapses and reasons behind jailbreaks, had in April 2004 recommended strengthening the staff strength at the jail by hiring permanent staffers in April 2004. The recommendations had been pending with the MHA for a long time. 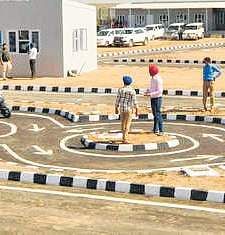 The Chandigarh Municipal Corporation has increased the charges for testing the quality of water. As per the public notice issued by the corporation, charges for the chemical testing of water have been increased from D500 to D1,500 per sample. For chemical and bacteriological testing, the charges will now be D3,000 per sample it was just D1,000. The MC has also increased charges for collection of water samples from D200 to D300. These rates will be applicable to all consumers, public and private. Interestingly, water testing is mandatory for all institutions that supply water through tubewells. Earlier this year, the National Accreditation Board for Testing and Calibration Laboratories (NABL) approved a new water testing facility for drinking water.

The registration and Licensing Authority of the Chandigarh Administration is all set to introduce driving tests on the automated test track this weekend. The Central Institute of Road Transport, which has prepared the software, is trying to resolve final glitches. The RLA will allow tests only through online appointments and around 150 tests will be conducted daily in two batches.

Now, one will be able to celebrate his/her birthday on the ‘Hop-on-Hop off’ open double decker bus which is run by the Chandigarh Industrial and Tourism Development Corporation (CITCO) in the city.  The bus can be hired between 9 am to 6 pm for the party. Food will be served by the corporation. A non vegetarian meal will cost D550 per person while a vegetarian one would cost D500. The food is served in packed boxes along with a welcome drink and bus will keep moving from one tourist destination to another. Users can opt for puppet shows, magic shows for an extra charge.

Our correspondent in Chandigarh