NEW DELHI: Ignoring objections from the legal fraternity, President Ram Nath Kovind on Wednesday accepted the recommendation of the Supreme Court collegium to appoint justices Sanjiv Khanna and Dinesh Maheshwari as judges in the highest court of the land. Chief Justice of India Ranjan Gogoi will administer the oath of office and secrecy to the newcomers on Friday.

Justice Sanjiv Khanna’s elevation was recommended by the collegium on January 10 overlooking seniority, which sparked a controversy. 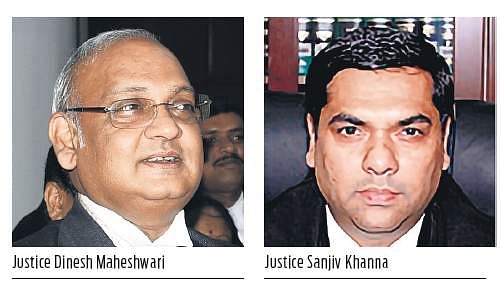 Supreme Court judge Sanjay Kishan Kaul had already written to Justice Gogoi not to ignore the seniority of the chief justices of the high courts of Rajasthan and Delhi, Pradeep Nandrajog and Rajendra Menon, respectively. And retired Delhi High Court judge Kailash Gambhir wrote to the President saying Justice Khanna’s elevation will create problems in the bar and disquiet among the judiciary.
However, there have been previous instances of judges being promoted to the SC ignoring seniority. Justice Khanna is at number 33 in the combined seniority of high court judges on an all-India basis. But seniority is not the only criterion, so on this basis alone, the collegium cannot be faulted for suggesting his promotion.

Justice Khanna is being directly elevated from his parent high court - the Delhi High Court - a rare occurance. He is the nephew of Justice H R Khanna, an upright former Supreme Court judge who was overlooked for the post of CJI by then prime minister Indira Gandhi during Emergency.
Only six judges have been elevated directly from their parent high court since 1997 - Justices S Abdul Nazeer, Ranjana Prakash Desai, Lokeshwar Singh Panta, G P Mathur, Ruma Pal and S S Quadri.

Regarding Justice Maheshwari, he was superseded when Justice Ajay Rastogi was elevated to the Supreme Court. The parent high court of both is the Rajasthan HC, where they were appointed as judges on the same day. Maheshwari took oath in the HC before Rastogi, so he became senior.

not the first to jump the queue
In 2017, two current SC judges, Abdul Nazeer and M Shantanagoudar, were elevated from Karnataka High Court although they were never chief justices of any high court. In fact, there were 20 judges who were senior to them. Justice Nazeer became the first judge in two decades to be promoted to the Supreme Court without being first elevated to the post of either a chief justice or an acting ghief justice of a high court