BHOPAL: An ex-serviceman who is working as security guard at the Jabalpur Municipal Corporation (JMC) in Jabalpur town of Madhya Pradesh was dragged, kicked and beaten badly by a group of men in full public view inside the Corporation premises on Monday.

The JMC security guard identified as Harish Patel was first circled by a man Shakti Chokse and his 6-7 aides, dragged in the JMC premises, before being kicked and beaten by Chokse and men brutally. 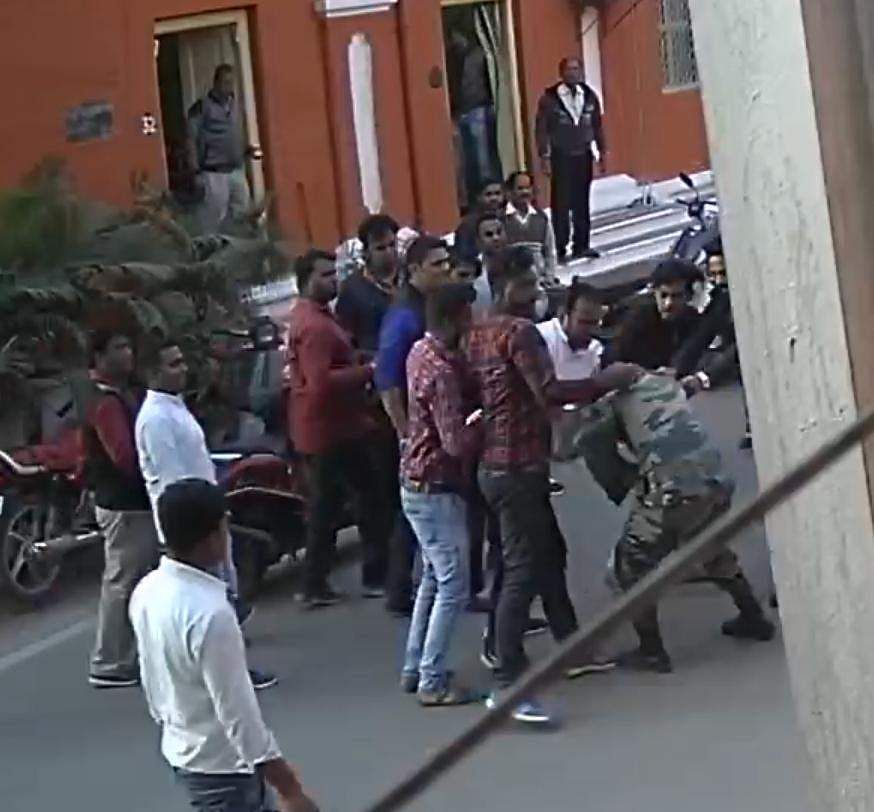 The Lok Sabha member from Jabalpur and state BJP president Rakesh Singh who visited the hospital where the ex-serviceman is admitted alleged that those who brutally attacked the ex-serviceman Harish Patel were Congress men, who were accompanying the minister in-charge for Jabalpur.

“It’s shocking as well as shameful that an ex-serviceman has been attacked by the supporters of those who are running the government in the state. Entire law and order situation in the state is in tatters, owing to which we staged protests across the state on Monday, when this shocking episode unfolded in the JMC premises,” said Singh.

Confirming the incident which happened in the evening, the Jabalpur district police superintendent Amit Singh said the concerned security guard had served the Indian Army for 24 years before his retirement. He was presently working as a security guard at the JMC, where the incident happened.

“On January 17 the JMC anti-encroachment team removed the encroachments from near the Stadium in Wright Town area. What happened in JMC premises on Monday evening was Part Two of January 17 incident, as Shakti Chowkse, whose encroachment was removed by the JMC team, along with 6-7 goons assaulted the ex-serviceman so brutally that he fell unconscious and has been hospitalized,” SP Jabalpur Amit Singh said.

“Entire incident of brutal assault on the ex-serviceman has been captured by the CCTV cameras installed at the JMC premises. We’re retrieving the CCTV grabs for further action. Initially, we have lodged case under Section 353, 332, 294, 147, 148 and 114 of IPC against Shakti Chowkse and his aides. As the victim is still unconscious, we’re waiting to record his statements, after which if required Section 307 of IPC, which pertains to attempt to murder could also be added in the case,” said Singh.

The shocker is being seen as attempt by Shakti Chowkse and his men to avenge the encroachment removal on January 17, as they had threatened the security guard with dire consequences that day.

Stay up to date on all the latest Nation news with The New Indian Express App. Download now
TAGS
Jabalpur Municipal Corporation