The ranking comes as global elites gather at this week’s annual World Economic Forum in Davos where they will discuss globalization and how innovation propels countries forward.

South Korea retained the global crown in the 2019 Bloomberg Innovation Index, though improvements by Germany in research and education brought Europe’s largest economy to near-parity in the annual ranking.

The U.S. moved up to eighth place, a year after cracks in education scores pushed it out of the top 10 for the first time.

The United Arab Emirates made the highest debut in 46th place. Brazil rejoined the index in the 45th spot after not being ranked last year.

Also among the new entrants are some of the world’s largest emerging economies: India, Mexico, Vietnam and Saudi Arabia. While India is placed at 54th place, South Africa remains the only Sub-Saharan nation to be ranked.

The 2019 ranking process began with more than 200 economies. Each was scored on a 0-100 scale based on seven equally weighted categories. Nations that didn’t report data for at least six categories were eliminated, trimming the total list to 95.

The ranking comes as global elites gather at this week’s annual World Economic Forum in Davos, Switzerland, where they will discuss the future of globalization, the role of the state and how innovation propels countries forward.

In the Bloomberg Index, Germany almost caught six-time champion South Korea on the strength of added-value from manufacturing and research intensity, much of it built around industrial giants such as Volkswagen AG, Robert Bosch GmbH and Daimler AG. Although South Korea extended its winning streak, its lead narrowed in part because of lower scores in patent activity. 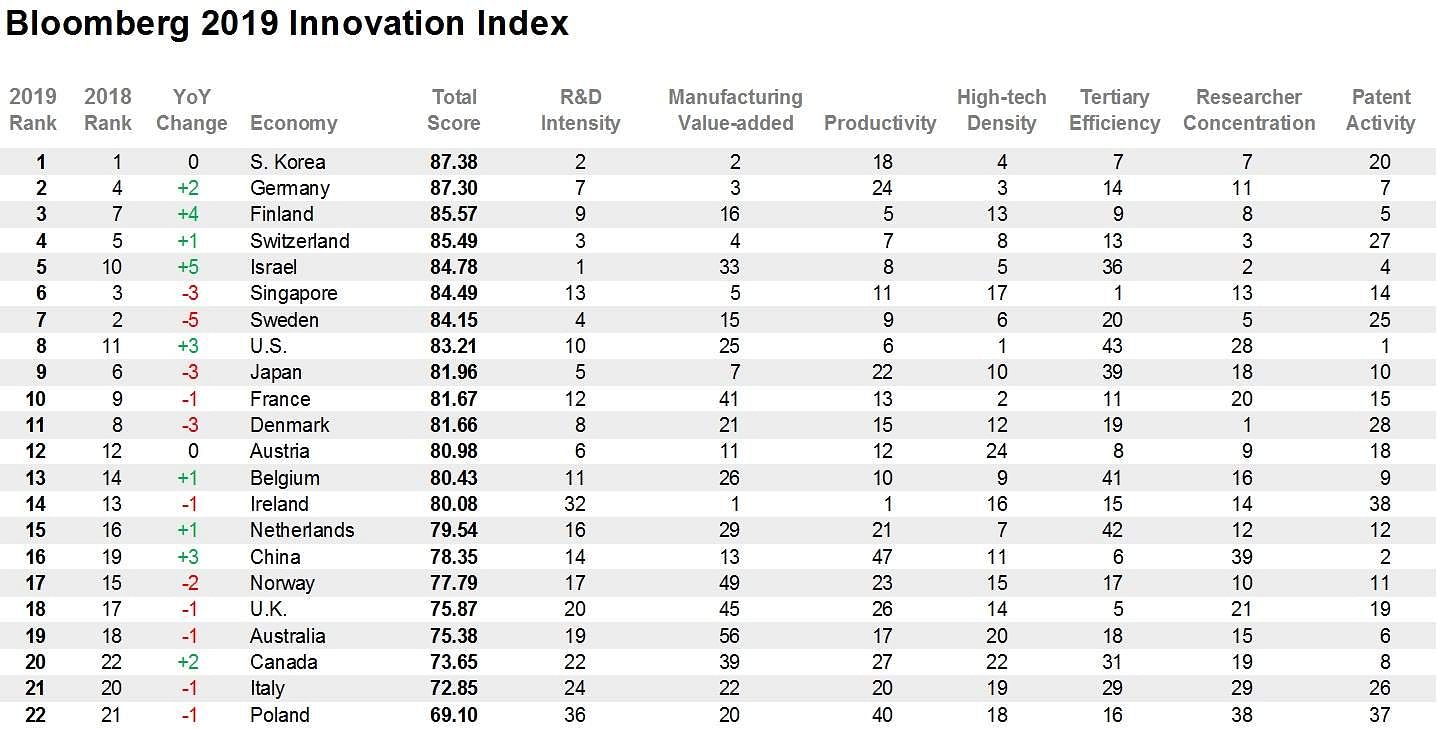 Sweden, China
Sweden, the runner-up in 2018, fell to the seventh spot. Patent activity boosted the scores for China and Israel, which was a big winner by jumping five spots to fifth overall. The Middle Eastern country surpassed Singapore, Sweden and Japan in the process.

South Korea’s staying power at No. 1 should receive a boost from fresh investments in strategic technologies and a regulatory program that encourages startups, according to Khoon Goh, head of research at Australia & New Zealand Banking Group Ltd. in Singapore. He sees the challenge, though, in moving innovation beyond the “highly concentrated large chaebols,” or family-run conglomerates.

“Innovation is becoming increasingly important to drive economic performance, particularly in the higher-income Asian economies where there is no longer a demographic dividend and higher value-added manufacturing assembly is being shifted to lower-cost countries in the region,” Goh said.

Tentative Rise
Germany’s rise in the Bloomberg ranking also seems tentative, as Europe’s largest exporter struggles with a shortage of skilled workers and changing immigration policies, according to Juergen Michels, chief economist of Bayerische Landesbank. It must hone its strategy in high-tech sectors, including industries such as diesel, digital communications and artificial intelligence, he added.

The U.K. fell one spot to 18th and lost out to China for the first time. China’s score reflects a dichotomy in the world’s second-largest economy: it ranked No. 2 in patent activity on the strength of R&D from Huawei Technologies Co. and BOE Technology Group, but still lags behind most innovative alums in overall productivity.

The U.S. rose three spots to eighth, after falling out of the top 10 for the first time last year. Faster product cycles and intensifying competition are changing the ways managers have to work, according to Pfizer Inc.’s presentation at a recent conference on health care.

“Mediocre or incremental innovation is not going to be rewarded the way that they used to be,” Albert Bourla, chief executive officer of the New York-based drugmaker, told attendees at the J.P. Morgan Healthcare Conference.

“We need to make sure that we change the way that we operate so that we can remove bureaucratic processes. Innovation and bureaucracy, like water and oil, they don’t mix well together.”

Among 2019’s ranked economies, the biggest losers were Tunisia and Ukraine, which both fell out of the top 50. Ten economies joined the ranking in 2019 as more reliable data became available.

Now we are on Telegram too. Follow us for updates
TAGS
Innovation index south korea research and development R&D World Economic Forum globalisation