The traffic crossings in uptown areas of the city such as Hazratganj and Indira Gandhi Pratishthan (IGP) are plagued with perennial traffic snarls.

The traffic crossings in uptown areas of the city such as Hazratganj and Indira Gandhi Pratishthan (IGP) are plagued with perennial traffic snarls. Authorities are therefore planning on launching their Integrated Traffic Management System (ITMS) at such locations in the initial phase of the project. According to the project, traffic will now be manned automatically with sensor-operated traffic lights and CCTV cameras coupled with a separate signal system for pedestrians. 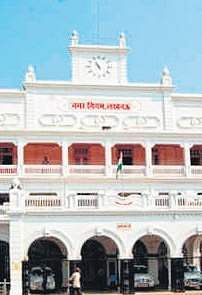 CCTV cameras would help nab traffic offenders who will be sent e-challans. Around 110 sensor-operated traffic lights and over 500 CCTV cameras will be installed at crossings across the city as part of Sugam Lucknow - one of the projects of Smart City Mission.

Children with multiple disabilities are being imparted skills for them to be able to build a foundation of which they can consolidate their future. The Drishti Samajik Sansthan — home to over 200 abandoned children facing multiple challenges — has trained kids with mild and moderate disorders in skills required for helping the staff at a cafe in the city.

The children, suffering from cerebral palsy and autism, are ready to shoulder their new responsibilities from next week as part of their training to develop business acumen in them. The children will spend two-three hours a day at the cafe to assist the staff. The initiative, undoubtedly, will help them get exposure and interact with people on a daily basis with confidence.

Lucknow may slip on ‘swachhta’ ranking

The laxity of the Lucknow Municipal Corporation (LMC) in addressing online complaints may cost Lucknow its spot of the Centre’s ‘Swachh Survey’. Of 400 points earmarked for redressing complaints made by citizens through the Swachhta app, the corporation score has only managed to tot up a score of 136.99 till recently. With only a few days left for the end of the survey, it would be difficult for LMC to reach even the halfway mark. Of the total 5,000 points in the survey, 1,250 are for citizen feedback — 850 for direct feedback which the survey team will get through interaction with people and 400 for online feedback through the Swachhta app.

UPCOP, the online portal for registering FIRs, is proving to be quite useful for the public. As many as 83 complaints relating to vehicle theft, vehicle loot and cyber crime have been registered in the 20 days since its launch on January 1. The application, which is designed by the UP Police technical services, will also be helpful in performance-evaluation of police stations by department brass. Top cop OP Singh feels it saves the common man from visiting a police station and therefore minimises the chances of human intervention. The application has multiple features and provides updates of the status of each complaint.