Rajasthan cops to shield couples who marry against family wishes

The senior-most women police personnel present at the police station will be appointed nodal officers for this purpose.

JAIPUR: In a big relief to inter-caste and inter-religious couples of legal age in love and wishing to marry against the wishes of their families, the Ashok Gehlot government in Rajasthan has ordered deputy commissioners and superintendents of Police to provide them full security.

A circular issued by Additional Director General of Police, Civil Rights, Junga Srinivasa Rao on Wednesday said security will be provided to couples who go for inter-caste and inter-religious marriages. The senior-most women police personnel present at the police station will be appointed nodal officers for this purpose. 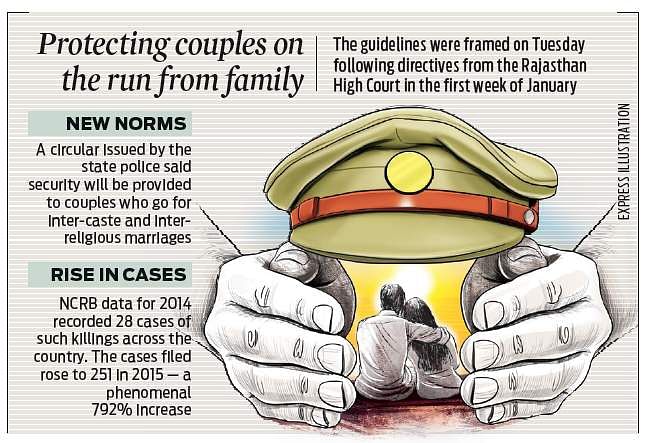 The guidelines were framed on Tuesday following directives from the Rajasthan High Court in the first week of January while hearing a petition by one Bajrang Lal. Hearing the petition, the HC had asked Rajasthan DGP Kapil Garg to take immediate steps for security of such couples.
National Crime Records Bureau (NCRB) data for 2014 had recorded 28 cases of ‘honour’ killings nationwide but noted that in 2015, this rose to 251 cases “due to better reporting”— a phenomenal 792% increase over the last year.

The NCRB also noted that most such killings were carried out by family members who disapproved of inter-religious and inter-caste marriages. Rajasthan, Haryana, Uttar Pradesh and Punjab led the list of such killings.

n September 2018 a 15-year-old girl was burnt alive, the police report calling it an ‘honour killing’. In May the same year, a 21-year-old Muslim youngster from Bikaner was abducted, tortured and murdered by a girl’s family.

Rao said a WhatsApp helpline is also in the pipeline. “As soon as information is received, district and state level nodal officers will co-ordinate with the respective police stations,” he said.
“This will help couples to get married without fearing parents and society...” said women’s rights activist Nisha Siddhu.