The square at Flora Fountain is known as the Hutatma Chowk in memory of 105 martyrs who laid down their lives during the United Maharashtra movement in the late 1950s.

Thackeray memorial in the pipeline

The square at Flora Fountain is known as the Hutatma Chowk in memory of 105 martyrs who laid down their lives during the United Maharashtra movement in the late 1950s. In the following decade the movement gave Maharashtra another icon, Balasaheb Thackeray, whose memorial is to come up at the erstwhile Mayor’s Bungalow. Over 70 mayors of Mumbai have lived in the bungalow till date. Apart from a life-size statue of Balasaheb, the memorial will house his photographs, cartoons, books and audio-visual material on his life. The memorial is expected to up in about a year’s time after the state government cleared 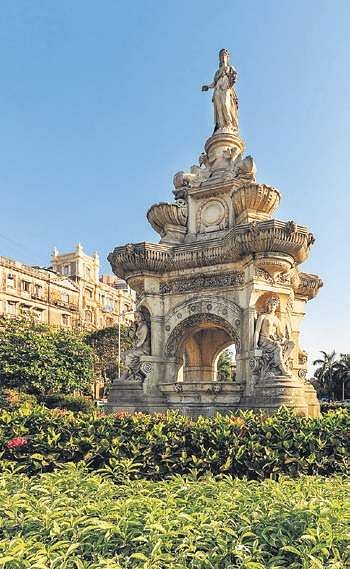 D100 crore for the construction earlier this week. Thackeray was a magnetic personality who was able to capture the attention of the city’s masses in an undoubtedly religious fervour. Coincidentally, the foundation of Thackeray memorial was laid just a day ahead of another icon was restored. Balasaheb was a cartoonist who later moved into political activism and later founded the Shiv Sena. The party is currently an ally of the NDA in the Centre but has decided to split away.

After the official residence of Mumbai Mayor was officially handed over for the Thackeray memorial, Mumbai’s current Mayor Vishwanath Mahadeshwar shifted to another British Era bungalow in the premises of Veermata Jijabai Bhosale Zoo at Byculla earlier this week. Since the plan was finalised to do so a few months back, social media has been flooded with comments over the change. People raised several questions on the propriety of the move and the priorities of the city. Several new animals were to be brought to the zoo under its revamp program. However, the plan had to be deferred due to priority for the Mayor’s shifting, the people and activists have argued.

Vada Pav is another icon that United Maharashtra movement gave the city of Mumbai. The Vada Pav has given the ‘Marathi Manoos’ of the city his identity when his role was confined to that of a mill worker in the numerous textile mills of the city. The snack was an instantly popular fast food in early days of the Shiv Sena. Founder Balasaheb Thackeray had just started raising his voice against the dominance of ‘outsiders’ in while collar jobs in the city and appealed to Marathi youngsters to start their own businesses. For many of them, the first business they could think of was setting up Vada Pav stalls.

The roughly 150-year-old Flora Fountain, one of Mumbai’s landmark structures, has now been restored after two years of tireless efforts put in by a team of conservation architects. The fountain, built by the Agri Horticultural Society of Western India, has been in operation since 18 November 1869. It was built with a generous donation of D20,500 received from owner of a fleet of ships and philanthropist Seth Cursetjee Furdoonji Parekh in October 1864 in memory of the then Governor of Bombay Sir Bartle Frere. The ceremony for inaugurating the restored icon however, remembered none of this history, and was focused on today’s politics with Shiv Sena scion Aditya Thacekray in attendance.