Delhi, according to its current climatic condition, has a negligible risk and Patna has a high risk on wheat production.

NEW DELHI: Wheat cultivation in India will be affected by substantial changes in the environment post-2030 with risk expected to increase further post-2050, although not uniformly across the country, said a study. 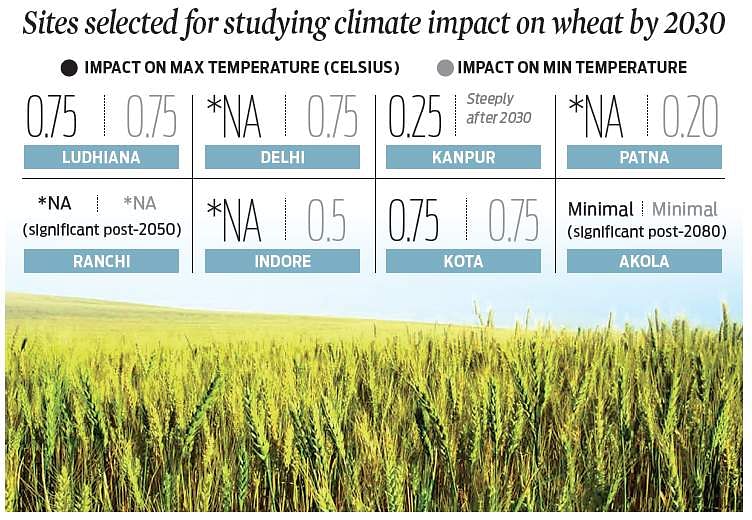 “Most sites appeared to be at moderate risk due to temperature increase at these sites by the year 2030, and except for two sites, had significantly reduced yields. Comparisons were made specifically for the year 2030, keeping in mind changes in agricultural techniques and mechanisms that could potentially occur over a span,” said the study.

Delhi, according to its current climatic condition, has a negligible risk and Patna has a high risk on wheat production. Ludhiana and Ranchi have moderate risks in terms of climatic changes based on a number of days beyond the optimum range.

“In the current situation, the high-risk regions would lose out on yields. Climatic change can alter the suitability of a geographic area for crops that are typically grown there, leading to possible changes in the type and extent of crops,” it said. Wheat, the second most common staple food crop in India, is one of the most critical food crops in India and any negative impact on its growth and yield in the future would have significant repercussions on the country’s food supply.

Wheat grows in cooler temperatures, with early winter sowing. Therefore, with temperatures rising towards the end of its growth, namely the grain-filling stage during summer months, changes in temperature can potentially reduce wheat productivity in certain regions of its cultivation