Here's why experts are worried about the rising tiger population

According to the NTCA, India’s maximum tiger capacity with respect to the available area of tiger reserves stands approximately at 3,000.

NEW DELHI: India is all set to release the tiger census data later this year and according to preliminary estimation, the number of big cats is expected to rise. This should give wildlife experts a reason to cheer, but they pointed out that this likely increase is concerning as many tiger reserves are already beyond carrying capacity. Also, there is huge pressure on areas outside tiger corridors due to development projects.

At the time of deliberations, India’s tiger estimate stood at 1,411, which after the third cycle of the All India Tiger Estimation 2014 has reached 2,226. Released every four years, tiger estimation 2018 is in the final stages of compilation and assessment by the National Tiger Conservation Authority (NTCA).
“Tiger numbers are expected to rise as a comprehensive exercise for estimation has been carried this time. Several areas in northeast India that were not assessed in 2014 have been covered,” said a senior environment ministry official.

According to the NTCA, India’s maximum tiger capacity with respect to the available area of tiger reserves stands approximately at 3,000.“Having more than 3,000 tigers can pose threat as big cats need large land areas and many die from infighting for territory. Increase in tiger population with the shrinking geographical area can be dangerous,” the official said. 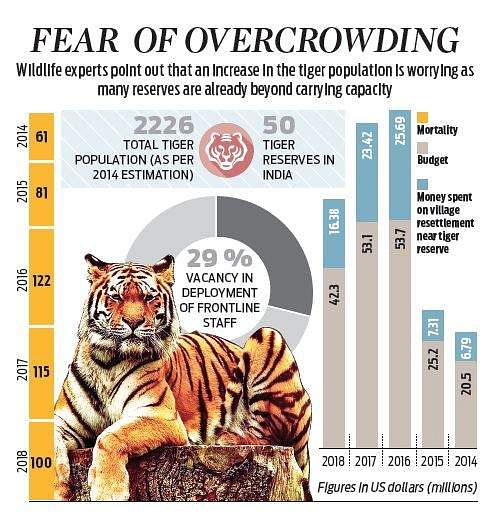 Stay up to date on all the latest Nation news with The New Indian Express App. Download now
TAGS
Triger Tiger population