"Hindu Mahasabha Murdabad" reads the caption in red once the website is opened, followed by the message that Gandhiji always remained an inspiration for people to follow the path of non-violence.

The website of Hindu Mahasabha was hacked by a group of "ethical hackers" from Kerala, a day after the right-wing organisation commemorated Mahatma Gandhi martyrdom day as 'Shaurya Divas' by shooting an air gun at an effigy of the late leader.

"Hindu Mahasabha Murdabad" reads the caption in red once the website is opened, followed by the message that Gandhiji always remained an inspiration for people to follow the right path of non-violence.

In what seems to be a message to the organisation, the hackers of "Kerala Cyber Warriors" also posted Gandhi quote on the website. "Nobody can hurt me without my permission. An eye for an eye only ends up making the whole world blind."

This is not the first time the KCW has launched a cyber attack on the ABHM website. Following  ABHM chief Swami Chakrapani’s controversial statement that only those who do not consume beef should be helped in Kerala floods, they had hacked www.abhm.org.in and posted the photo of a beef dish, along with warnings to the organisation in strong words.

The hackers on Thursday, once again, posted their discontent against Hindu Mahasabha leader Puja Skakun Pandey, who shot at Gandhiji's effigy on Wednesday. 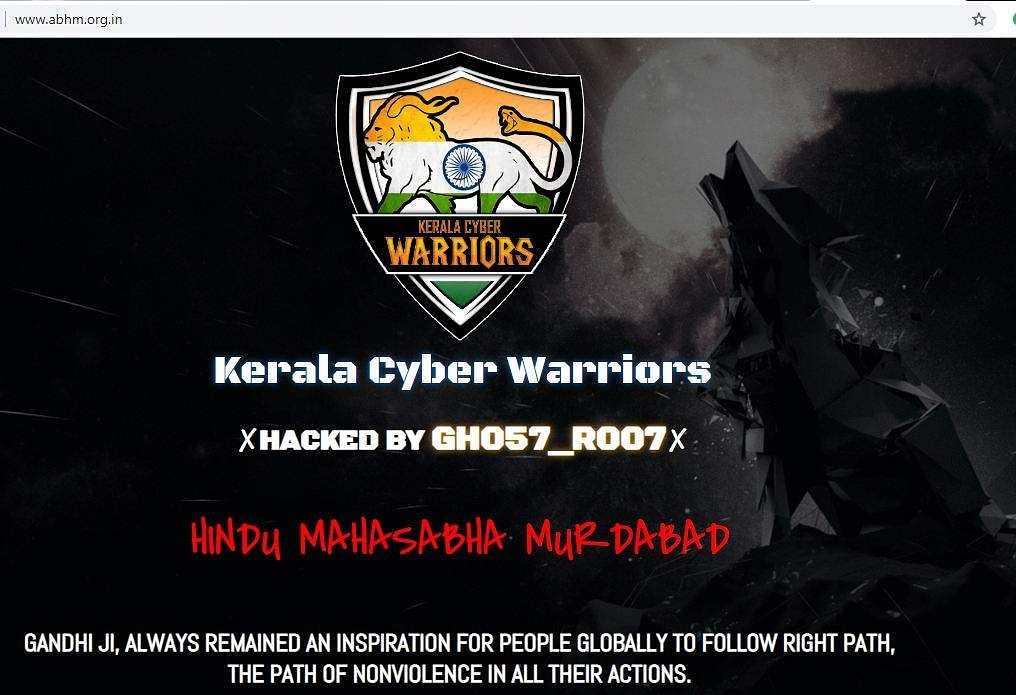 The UP police on Wednesday registered cases against 13 persons, including Pandey for firing at an effigy of Mahatma Gandhi in Aligarh.

In a video, which has gone viral on social media, Puja Shakun Pandey can be seen holding a gun and taking an aim at Gandhi's effigy. However, as Pandey was about to pull the trigger, she was stopped by one of the persons, who went on to say, "Chalana nahi. Abhi to photo session ho raha hai (Don't shoot just yet. Right now it is the photo session)."

After recreating Gandhi's assassination, Pandey went ahead to garland Godse's statue and distributed sweets. Over the years, the fringe group has been observing Gandhi's death anniversary as 'Shaurya Divas'