Closure of Pakistan airspace has cost Air India and other Indian airlines dearly. The national carrier has lost nearly `491 crore due to the closure since the end of February.

NEW DELHI: Closure of Pakistan airspace has cost Air India and other Indian airlines dearly. The national carrier has lost nearly Rs 491 crore due to the closure since the end of February. Other private carriers including SpiceJet, Indigo and other airlines have also witnessed losses on this account. 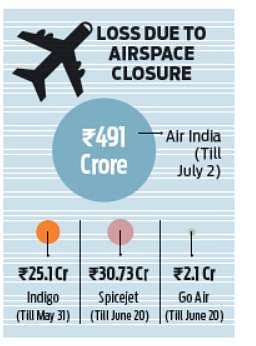 Pakistan had closed its airspace following an aerial engagement along the Line of Control on February 27 in the wake of a suicide attack by the Jaish-e-Mohammed (JeM) that killed 40 Indian jawans in Pulwama.
The closure of the air space has led to longer routes and enhanced flight timing as airlines have no option but to bypass Pakistan airspace. According to an official, this led to rise in fuel expenses, operational costs and maintenance costs and also higher duty hours for aircrew.

On June 28, Pakistan extended the ban on its eastern airspace until July 12.
An Air India official said on an average the national carrier is losing nearly `6 crore every day. Sources claimed that the national carrier has now written to the International
Air Transport Association (IATA) seeking help.
Debt ridden Air India has incurred a loss of `7,635 crore in 2018-19, which is the highest in last five financial years. This is despite the constant capital infusion by the government— nearly `17,000 crore in the last five years.

After the ban, aircraft are forced to take detours and officials said this is mainly affecting flights to Europe, the US and some other countries.
Recently, Pakistan gave special permission to PM Narendra Modi’s VVIP flight to use its airspace for his official trip to attend the Shanghai Cooperation Organisation summit in Bishkek, the capital of Kyrgyzstan.
However, Modi’s flight avoided flying over Pakistan.