According to reliable reports, it appears that 40 per cent of Indian cities will experience water crisis as early as next year.

Not all things that are fast are better. We know so in the context of food already. But today I will speak of another issue which is closely connected to food and wellbeing that our nation is deeply affected by.

Recently, Chennai experienced a severe water crisis and the misery of its residents was all over the news. A similar situation occurred in Shimla, the Queen of the Hills, just some months ago.

According to reliable reports, it appears that 40 per cent of Indian cities will be in a similar situation as early as next year. It was heartening that PM Modi’s first episode of Mann Ki Baat this tenure was centred on water.

The constitution of the Jal Shakti Ministry is yet another much-needed measure to preempt an irreversible crisis and an ensuing war for water. Conserving water at all levels – home, community and government schemes – is the need of the hour.

What must also be taken into account are the related environmental concerns. The stark effects of climate change are being seen globally – the thinning of ice sheets, rising sea levels and soaring temperatures in parts of the world that have remained relatively cool so far.

Destruction of crops, higher food prices, and malnutrition in the population, are also linked to climate change. 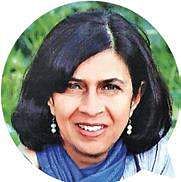 After all, soil, vegetative cover and water, are interconnected and a change in any one of these is bound to affect the others.

We in India have traditionally respected our natural environment in countless ways. The West may only just have begun the conversation on upcycling, recycling, conserving and reusing materials to preserve the environment, but we have always done so.

Be it water, clothes, shoes, machines, cars, and just about anything else, we have known how to utilise our resources most effectively. From waste segregation and collecting edible peels of produce to feed animals, to using stainless steel utensils and cloth bags for shopping, we have long been eco-friendly in our practices. The Indian tradition of worshipping trees is yet another indicator of our respect for the environment.

Ayurvedic classics have described the uses of thousands of medicinal plants, many of such plants are yet to be discovered. The neem tree, for example, holds unique medicinal value in its bark, leaves, seeds and flowers.

If a single tree can be so valuable, imagine what a forest can do for us! Speaking of the coastal mangrove tree, it purifies the air at no cost (air purifier sales in Delhi have skyrocketed in the last one year). Mangroves are also very efficient (four times better than tropical forests) in controlling the effects of global warming, giving us another reason to be indebted to them.

They have the capacity to remove large amounts of carbon-dioxide from the atmosphere and store it within the plant, hence earning the title of carbon-sinks.

Knowing all of this, I am gripped by despair that 54,000 mangrove trees will be felled to make way for the bullet train in Maharashtra.

Very simply put, the loss of this green cover will lead to groundwater depletion. With the impending doom of a water crisis, this is hardly palatable.

Here is, perhaps, our (only) chance to show the world that we care more about our air, water conservation and our natural reserves, than about a development trap such as the bullet train.