The Central Industrial Security Force,  which is in charge of vital installations, VVIPs, airports and important government buildings and monuments, lost two personnel in the past two years.

NEW DELHI:  At least 176 CAPF personnel have lost their lives while on duty in the past two years, with maximum casualty being reported from the CRPF, which lost 81 of its personnel. The country’s largest paramilitary force, CRPF, which is at the forefront of the fight against Maoist violence in Chhattisgarh and Jharkhand and is fighting militants in Kashmir, lost 52 personnel in 2017 and 29 Bravehearts in 2018. 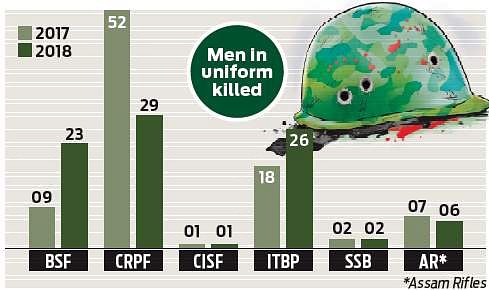 The Indo-Tibetian Border Police, posted in inhospitable terrains in areas bordering China and for internal security duties, has reported the second highest casualty with 44 deaths, according to information shared by Minister of State for Home Affairs Nityanand Rai in the Rajya Sabha.

The Border Security Force, which faces the brunt of Pakistani shelling and violence from smugglers along the border with Bangladesh, lost 32 personnel in 2017 and 2018. The Assam Rifles lost 13 personnel in the last two years while the Sashastra Seema Bal lost four personnel in the same period.

The Central Industrial Security Force, which is in charge of vital installations, VVIPs, airports and important government buildings and monuments, lost two personnel in the past two years. Rai also said there is no “official nomenclature” to accord martyr status to the CRPF men killed in the Pulwama attack.