The poem was written in the colloquial Miya dialect – a spoken language of the Bengali-speaking Muslims in Assam.

GUWAHATI: A poem, replete with emotions given the hardships the minorities in Assam are faced with to prove their Indian citizenship, has triggered a controversy.

The poem, “Miyah Poetry”, was written in the colloquial Miya dialect – a spoken language of the Bengali-speaking Muslims in Assam – by Kazi Neel alias Kazi Sharowar Hussain. It was translated into English by Shalim M Hussain.

The poem was recited by some people and shot in a video which has since gone viral on social media.

One Pranabjit Doloi filed an FIR with Panbazar police station in Guwahati against ten people including poets, reciters and activists. He alleged they had put Assam and the Assamese in a bad light.

In his complaint, he questioned certain lines in the poem such as “The land that makes my father an alien”, “That kills my brother with bullets”, “Will you hate him as you hate me”, “My mother is a D (doubtful) voter though her parents are Indians”, “Your torture has burnt my body black” etc. 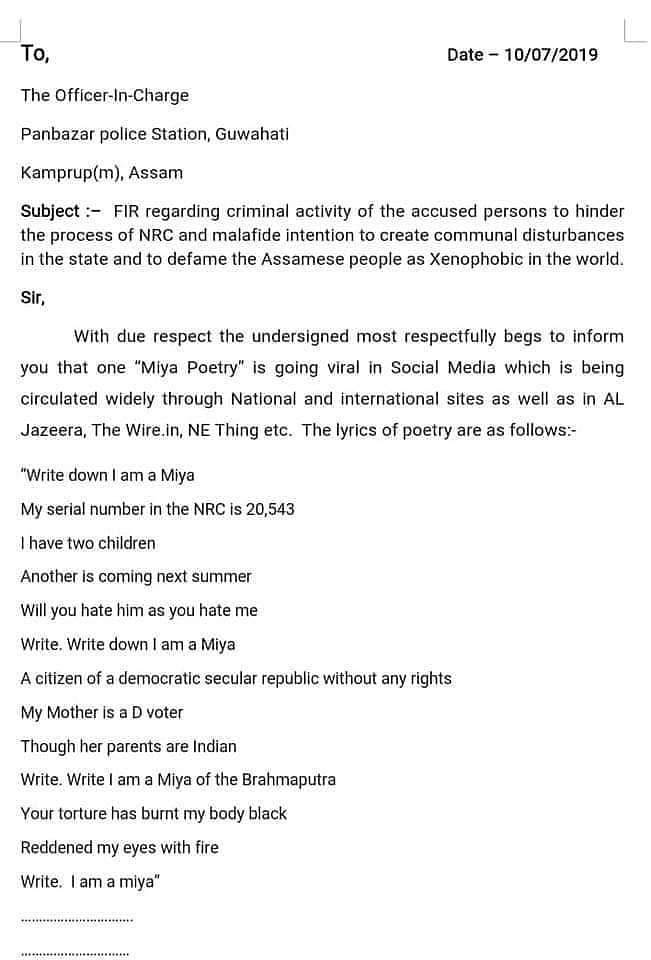 Doloi said “land” meant Assam where the National Register of Citizens (NRC) was being updated. He alleged the persons named in the FIR had tried to create an image of Assam as being a barbarian state in the eyes of the world.

“They are branding the Assamese as being xenophobic. The main intention of the poem is to provoke their community against the system and society,” he alleged in the FIR. 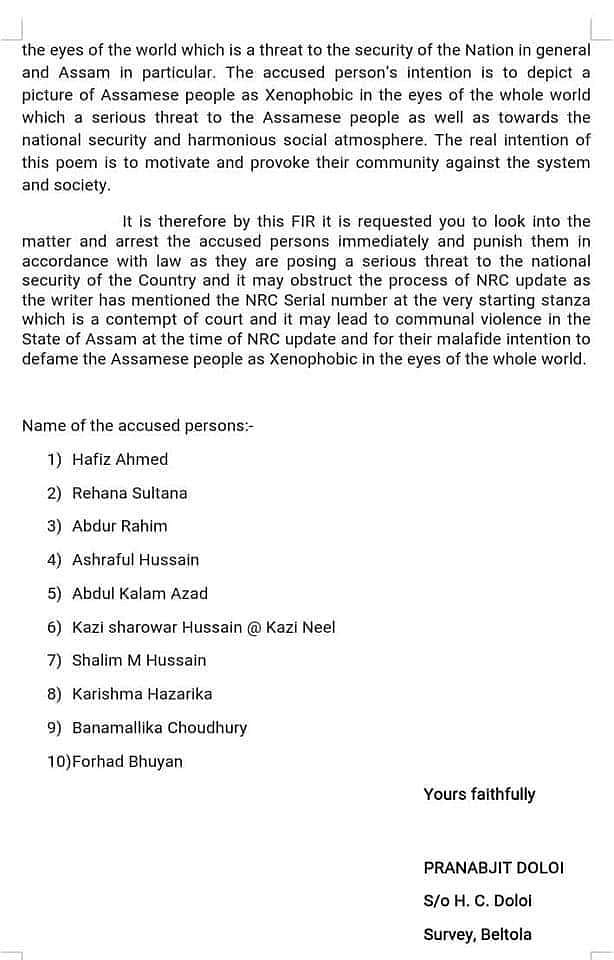 Noted Assamese litterateur, Nagen Saikia, warned that if the government took the matter lightly, it might have serious consequences.

“Efforts are on to propagate the Miya Poetry at the international level. It should be nipped in the bud as it is a threat not just to Assam but to the country as well,” he said.

The Asom Jatiatabadi Yuva Chhatra Parishad alleged it was a conspiracy hatched against Assam and the Assamese. The police said they were probing the case.

“We have written to the authorities to stop the circulation of the poem through social media. Our investigation is on,” Deputy Commissioner of Police, Dharmendra Das, said.

The persons named in the FIR rubbished the charge that they were fanning communal passion. They said “Miyah Poetry” is a collection of poems written three years ago.

“These poems include stories of humiliation and discrimination, love poems, poems spreading social awareness etc. The current debate over Miyah Poetry is baseless because poems written three years ago are now being dissected and a few lines of two poems are being cherry-picked and taken out of context,” they said in a statement.