Chandrayaan-2: Countdown begins for India's most ambitious lunar mission yet

The mission, which will take off from launch pad-2 of ISRO's Satish Dhawan Space Centre at Sriharikota, at 2.51 am on July 15, is scheduled to touch down on September 6 near the lunar south pole.

BENGALURU:  At 6.51 am on Sunday, the countdown for India’s Chandrayaan-2, its first unmanned mission expected to land on the lunar surface on September 6-7, 2019, has begun.

The mission, which will take off from launch pad-2 of Indian Space Research Organisation’s (ISRO’s) Satish Dhawan Space Centre (SDSC) at Sriharikota, at 2.51 am on July 15, is scheduled to touch down on September 6 near the lunar south pole between two craters — Manzinus C and Simpelius N — to make it only the second one after the January 2019 Chinese Change-4 mission.

The Rs 978 crore mission, on board India’s indigenously developed, and the country’s most powerful rocket so far, Geosynchronous Satellite Launch Vehicle (GSLV)Mk-III-M1, will exit the Earth-bound phase on day 17 (July 31), taking July 15 as day 1.

ISRO scientists explained that during these 17 days, it will be slinging around the Earth in five consecutive orbits before being jettisoned towards the lunar orbit, a procedure called lunar transfer trajectory.

After five days, on August 5, which will be day 22 after launch, the spacecraft will enter the lunar orbit and revolve around the moon. Initially, the elliptical orbit will be 100 km (longest distance from the moon) X 30 Km (shortest distance), which will be raised to 100x100 km orbit. This is expected to be achieved 28 days after August 5, or on day 49 of the mission.

Finally, the lander Vikram will separate from the orbiter on Day 50 of the mission and will de-boost a day later.

The powered descent will begin on Day 54, or September 6, and Vikram will make a soft landing on the lunar surface in 15 excruciating minutes, a decisive moment for the success of the mission.

The orbiter will relay data to station at Byalalu

Pragyan and Vikram have a mission life of one lunar day (14-15 days) while the orbiter will continue for a year before crashing into the lunar surface. 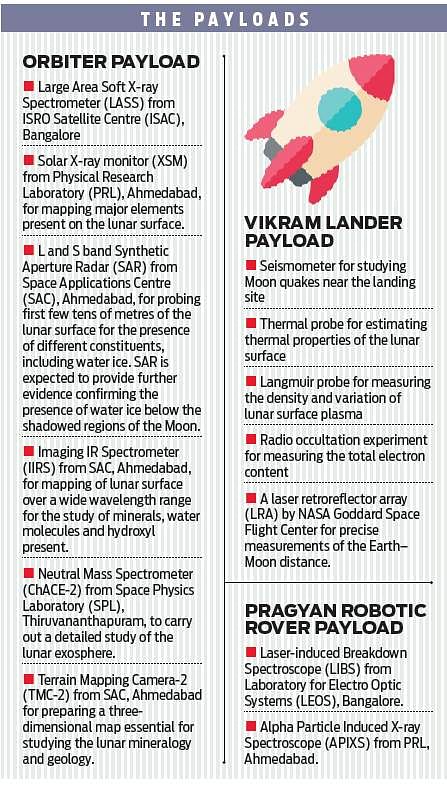 Chandrayaan-2 is being seen as a data generator for future Indian lunar touchdown missions like the Chandrayaan-3 in 2024 in collaboration with Japan Space Agency JAXA, as well as for NASA’s two-phased Artemis programme, scheduled to return human beings to the lunar surface, also by 2024.

ISRO chairman K Sivan said as this will be India’s first indigenously performed soft-landing on the moon, the most anxious moments for the Indian space scientists will be the 15 minutes when the lander Vikram separates from the orbiter and lands on the lunar surface at the designated point.

The lander will separate from the orbiter when the latter will be in its orbit at 100 km altitude above the lunar surface.

“From landing to touchdown, every second will be critical,” he said.

“Variation in local gravity has to be factored into the lunar descent trajectory. The on-board NGC (Navigation Guidance & Control) and propulsion system has to work in unison, autonomously and automatically for a successful landing. Further, the landing site landscape features should not result in communication (with Earth-based ground stations) getting disrupted,” he said.

While trying to gather an undisturbed historical record of the inner Solar system environment through the moon, which is considered the best linkage to Earth’s early history, the Chandrayaan-2 mission will also study the extent of water molecule distribution near the lunar south pole and thereby the origin of water on moon itself.

It will also attempt to foster a new age of discovery, increase our understanding of space, stimulate the advancement of technology, inspire a future generation of explorers and scientists and promote global alliances.

Chandrayaan-2 mission will study the extent of water molecule distribution near the lunar south pole and thereby the origin of water on moon itself.