ISRO is targetting a launch window between July 9 and July 16, which leaves the space agency with just another day for the launch.

BENGALURU: Early on Monday morning, space enthusiasts from across the world prepared to tune into the live broadcast of India’s Chandrayaan-2 mission launch.

Set to go live from 2.30 am onwards for the launch at 2.51 am, the broadcast was halted much before as a technical snag threw the mission off course.

The snag was detected in the fuel conductor of the cryogenic engine of the massive 640-tonne Geosynchronous Satellite Launch Vehicle (GSLV) Mark-III M1.

The GSLV Mark-III, nicknamed the ‘Baahubali’ for its sheer lifting power, was to launch the country’s first moon-landing unmanned mission. But the mission was called off 56 minutes and 24 seconds before liftoff.

The Indian space scientists did not want to take any chances by hurrying up the process to meet the deadline. The launch window was open from July 9 to 16.

The postponement is “indefinite”, sources explained, saying the correction process itself is likely to take about ten days.

This means only after the snag is rectified will the ISRO look for a fresh launch window.
The fresh date for the Rs 978 crore Chandrayaan-2 mission launch is expected to be several days away, with one estimate suggesting  a delay of at least 45 days.

A lot is riding on GSLV Mark-III, since it is expected to be the launch vehicle for India’s first ever manned space mission, the Gaganyaan, for which PM Modi has set a 2022 deadline. 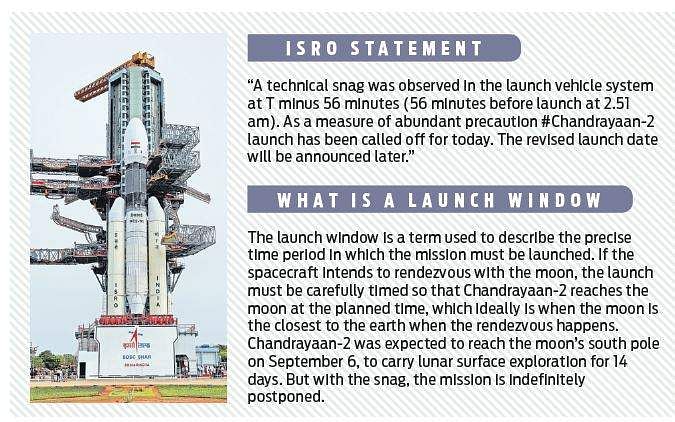 Engine to be drained of fuel: Scientist

While the Chandrayaan-2 mission is an unmanned mission, it is being viewed as crucial because of the role the GSLV Mark-III has to play in  Prime Minister Narendra Modi’s pet 2022-scheduled manned space mission, Gaganyaan. Three Indian astronauts will be sent into space for a week on board the same powerful launcher.

“It is better to be safe than sorry. If anything goes wrong with this launch (Chandrayaan-2), it would weigh heavily on the minds of the mission scientists for Gaganyaan, especially considering that there would be live astronauts involved in that mission,” a senior space scientist said.

The snag was detected late on Sunday night while filling liquid oxygen in the cryogenic engine stage of GSLV MkIII-M1.

This is the most powerful engine stage that will provide the final boost to the Chandrayaan-2 spacecraft carrying the lander and the rover stage which would actually carry out lunar surface-based experiments for the first time for India.

Indian Space Research Organisation (ISRO) scientists have said the technical glitch was such that they would have to drain the fuel from the cryogenic engine to commence correction measures.

For that the rocket would have to be withdrawn from the launch pad at Satish Dhawan Space Centre (SDSC) at Sriharikota, and taken to the assembly shed at the centre for investigations.

Fuel leak from a rocket engine is known to be a potentially serious defect as the entire rocket faces the threat of exploding if the fuel comes in contact with the flames from the thrusters while the rocket lifts off.

Scientists give the thumbs up

Several space scientists appreciated the ISRO for calling off the launch rather than hurrying into a major disaster. It is better to be safe than sorry, they said

New launch window to be decided

It is not possible to make the launch within the current window. A new launch schedule will be announced later. The delay could be at least 45 days.