Now, J&K governor says his 'terrorists should kill the corrupt' remark made in fit of anger, frustration

Satya Pal Malik said that as the Governor, he should not have made such a comment, but maintained that his personal feeling on the matter was unchanged.

Though Malik clarified that the statement was made in “frustration” and in “a fit of anger”, the controversy refused to die down, thanks to the Omar-Malik spat. 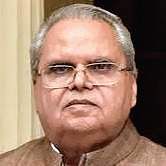 Omar slammed the Governor for his controversial statement. “Save this tweet - after today any mainstream politician or serving/retired bureaucrat killed in J&K has been murdered on the express orders of the Governor of J&K Satya Pal Malik,” Omar tweeted. “This man, ostensibly a responsible man occupying a constitutional position, tells militants to kill politicians perceived to be corrupt. Perhaps the man should find out about his own reputation in Delhi these days before sanctioning unlawful killings and kangaroo courts.”

Angered by Omar’s remarks, Malik said the NC vice -president is behaving like a  “political juvenile”.
“Omar is behaving like political juvenile. He comments on everything. Press only sees his tweets but does not read the comments on his Twitter in which 90 out of 100 people abuse,” he said.
On Omar questioning his reputation, Malik said, “There has been no charge on me during my 50 years of political career. Due to my reputation, I am here while where he is today, is because of his reputation.”
Advising the former CM to be careful in his statements, the Governor said, “He comments on everything. He has childish attitude.”

The Governor also clarified that he had made the statement out of frustration and fit of anger. “It was a fit of anger and frustration because of rampant corruption in the state. I have seen that politicians in the state have made a lot of money. Earlier, they had nothing but now they have got houses in four countries, and investments in hotels, properties,” he claimed.