Raking up the issue, Congress and other opposition leaders demanded that PM must make a statement and they were not satisfied with the government's plan to field External Affairs Minister to clarify.

NEW DELHI:  US President Donald Trump’s offer to mediate on Kashmir, citing Prime Minister Narendra Modi’s request to do so, triggered uproar in Parliament on Tuesday with the entire the Opposition demanding Modi’s clarification on the issue.External Affairs Minister S Jaishankar’s categorical denial of Modi’s request to Trump in both Houses of Parliament failed to satisfy the Opposition. “No such request was made... I would like to reiterate that India’s position is that all issues with Pakistan will be discussed only bilaterally and no third party will be involved in mediation,” Jaishankar said. 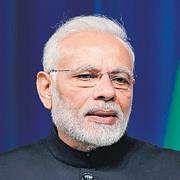 But the Opposition said since Trump had named Modi, he ought to be present in the House to personally clarify the position. Most opposition parties staged a walkout after lunch but BJD, YSRCP and TRS stayed back to participate in the debate.

Congress president Rahul Gandhi led the charge outside Parliament with a stinging tweet: “A weak Foreign Ministry denial won’t do. PM must tell the nation what transpired in the meeting between him & @POTUS.” And UPA chairperson Sonia Gandhi offered party MP Manish Tewari what looked like a transcript of Trump’s statement when he raised the issue in the Lok Sabha.

The Opposition later decided to continue pressing for the PM’s clarification and decided to hold a strategy meeting on Wednesday.Trump made the controversial statement while meeting Pakistan Prime Minister Imran Khan on Monday night. Reacting to the firestorm it triggered in India, Trump’s Chief Economic Advisor Larry Kudlow said: “The President doesn’t make things up.”

But to tamp down the fire, the US State Department in Washington later said Kashmir is a bilateral issue between India and Pakistan, adding the US welcomes the two countries sitting down for talks.