S Jaipal Reddy: A thinker with grit and wit

Politicians of all hues respected Jaipal for his deep insight into a number of issues that affected society.

HYDERABAD: Just a few leaders are remembered by the masses even after they depart because of the mark they leave behind. S Jaipal Reddy, who passed away due to pneumonia in the early hours of Sunday at a hospital in Hyderabad, belonged to this genre. He was 77.

Intellectuals and the callow crowd alike admired him. Politicians of all hues respected Jaipal for his deep insight into a number of issues that affected society. A politician with a difference, he was a scholar, writer and an eloquent and witty speaker. 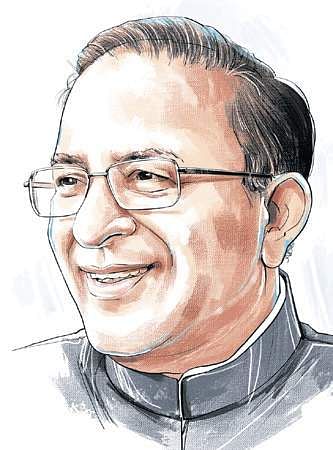 President Ram Nath Kovind aptly summed up his personality in his condolence message: “Jaipal Reddy was a thinking person’s politician and an outstanding parliamentarian.”
Though nature was not kind as polio struck him when he was 18 months old, he defied the challenge and grew in the political firmament to remain forever a source of inspiration to those who take public life as a career.

Born in Nermetta in Nalgonda district in 1942, he actually belonged to Madugul in erstwhile Mahbubnagar district. He had an MA and also a degree in journalism from Osmania University, Hyderabad.

Jaipal Reddy used to amaze admirers as well as critics with his fluency and vehemence in both English and Telugu. His English was impeccable and robust. He once described Manmohan Singh as a democrat not only by conviction but also by temperament. The deft play of words amused listeners as much as they made them reflect on his train of thought.

He used to always focus on issues, be it in the Janata Party or the Congress. His exemplary exposition of issues in Parliament bears testimony to this. And his fight against the Congress over the Bofors scam was legendary. At one stage, he had said Rajiv Gandhi should actually be hanged. He had no qualms or fears.

Similar was his observation in the AP Assembly when M Channa Reddy brought in the Anti-Goonda Act. He had said that if the Act had to be invoked, it should first be done against the CM himself since he had set a number of buses on fire while the Telangana movement  was raging. This was because Reddy had opposed the movement in the late 60s. He was a staunch supporter of  then chief minister Kasu Brahmananda Reddy who was against bifurcation of the State.

Though the body politic has been sullied over a period of time by allegations of corruption, Jaipal Reddy stood out untainted. This attribute is difficult for one to have when one has enormous power which could be converted into crores of rupees. He held important portfolios when he was Union minister, yet no one could point a finger at him for doing anything out of turn. As Vice President M Venkaiah Naidu said: “If one who is in public life upholds the dignity of the office he occupies and possesses probity, it is the real tribute one that can pay to Jaipal Reddy.”

ALSO READ: ‘Treasury benches used to turn nervous when he chose to speak’

He was a writer too and at the release of his book ‘10 ideologies’ last year, he defined how a democrat should be. He referred to Pericles, who ruled over Athens in BC. “Pericles used to tolerate criticism. One day when a critic kept on criticising him, he did not utter a word and when he went home, the critic followed him. After reaching home, Pericles called his servant, gave a torch asking him to escort him back to his home safe.” His resourcefulness in fielding questions at news conferences used to floor reporters. When asked why he chose to join the Congress after saying that Rajiv Gandhi should be hanged for the Bofors scam, he had said: “There were two options before me. Either I should remain egoist or respond to the call to be on the side that fights forces trying to rend the country asunder. I chose the second.”

ALSO READ: A fine human being who stood for socialist and democratic values, writes D Raja

His public life is a record of sorts. He was a five-time Lok Sabha member, two-time Rajya Sabha member, and four-time MLA. He even contested against Indira Gandhi in 1980 but lost the poll battle.
As a young Turk in his student days, he was impatient for effecting change in society. Propelled by this desire, he joined the Congress in 1970. When Veeramachineni Venkata Narayana was the president of the APCC, Reddy fought with the Congress on several issues. Fed up with the young boy’s insistent demands, Narayana issued a show-cause notice to him to which Jaipal Reddy had sent a 25-page reply in chaste English. But Narayana, without even reading it, expelled him, for which he incurred the wrath of the party high command. Later his expulsion was revoked. But when the Emergency was imposed, he could not stand it anymore and joined the Janata Party in 1977. He came back to the Congress in 1999. In 1998, he became the first parliamentarian from South India to be honoured with an outstanding parliamentarian award.

Reddy passed away with one unfulfilled ambition. He thought he could become the chief minister of AP before N Kiran Kumar Reddy took over. After the bifurcation, it was thought that he would be made the CM of Telangana State. But the Congress lost the election. No great loss for him. He lived his life, full.