A team of Bengaluru-based glaciologists have prepared a scientific brief to alert central policy-makers that immediate and advance measures have to be taken to avert a situation.

BENGALURU: A whole range of issues — unending cross-border terrorism and the radicalisation of youth in Kashmir being the most prominent among them — keep India and Pakistan in a volatile, eyeball-to-eyeball situation nearly perennially, the occasional eruption of peace gestures and overt or Track 2 talks notwithstanding.

Another perennial element is now added to the list of major conflictual points: the flowing water of our shared rivers. Yes, water-sharing has been a testy issue since the 1950s, but the Indus Water Treaty of 1960 had brought a modicum of sanity on that front. Till now.

Now, however, the situation has changed radically and the old equilibrium looks set to be conclusively overturned.  Massive glacier melt has constricted the volume of water flow, upsetting old calculations. If not addressed urgently, top scientists warn that it may keep the two nuclear-armed neighbours on the edge for the rest of the century, or worse, bring them to the edge of another conflict.

The problem, in a nutshell, is this. Indian scientists — glaciologists to be precise, who are studying the phenomenon using the latest climate modelling tools — predict that Pakistan will get a far greater share or volume of river water from the Indus basin, as compared to India. The visible trends speak of such a bend in the narrative.

A team of Bengaluru-based glaciologists have prepared a scientific brief to alert central policy-makers that immediate and advance measures have to be taken to avert a situation.

Researchers from the Divecha Centre for Climate Change (DCCC) at the IISc, Bengaluru, have attributed the change in water flow patterns to the adverse impact of climate change on major glaciers in the high Himalayan region which feeds all 6 rivers in Indus basin.

The research document predicts a disastrous decline in glacial melt feeds to the three channels of Ravi, Beas and Sutlej, which are meant exclusively for India’s use under the September 1960 Indus Waters Treaty as compared to the three rivers of Indus, Jhelum and Chenab, meant for the exclusive use of Pakistan.

They have predicted that by the year 2090, the three Indus basin rivers flowing into Pakistan — Indus, Jhelum and Chenab — will have a combined water volume of 1,178 cubic kilometres, compared to just nine cubic kilometres for the India-flowing rivers — Ravi, Beas and Sutlej. In 2010, the corresponding figures were 1,993 cubic km and 110 cubic km, respectively.

So while volumes are projected to decrease overall, even for Pakistan, the situation will clearly be far more dire for India. The 2010 figures seem already very lopsided, but remember — for Pakistan, these are its only water sources, their lifeline, while India has the whole Gangetic basin and other river systems.

The glacial melt run-off that feeds the Indus, Jhelum and Chenab in Pakistan will be 125 cubic km per year in 2090, compared to just 34 cubic km per year for the India-flowing rivers (Ravi, Beas and Sutlej), the science brief says.

The combined water volume of 1,178 cubic km will be the total quantity of water flowing in all the three Pakistan rivers at that time. The glacial melt run-off is the water coming in from melting glaciers per year and flowing into those rivers.

The ELA is the altitude at which accumulation of snow is exactly balanced by the removal of snow and ice from a glacier by melting or evaporation (ablation) over a period of a year.

The researchers, led by Dr Anil V Kulkarni, Distinguished Scientist and senior glaciologist, DCCC, say although glaciers for both western and eastern Indus basin rivers will get depleted due to climate change, the water supply to the Pakistani rivers will increase temporarily because of enhanced glacial melt (by 2070), but for the Indian rivers the melting will have reduced due to the much lesser number of glaciers and those too already having considerably melted.

Therefore, India is staring at a much-reduced feeding rate for India-bound Ravi, Beas and Sutlej.

Using a sophisticated predictive climate modelling system developed by the US’s National Oceanic and Atmospheric Administration’s Geophysical Fluid Dynamics Laboratory, called GFDL-CM3 (climate modelling version 3), the researchers arrived at the predictive conclusion that the western rivers’ basin in Pakistan would be 14,004 sq km in 2090, while that of the eastern rivers in India would be just 360 sq km.

The climate modelling research was conducted using the Representative Concentration Pathways 8.5 scenario, which combines assumptions about high population and relatively slow income growth with modest rates of technological change and energy intensity improvements, leading in the long term to high energy demand and greenhouse gases emissions in the absence of climate change policies. 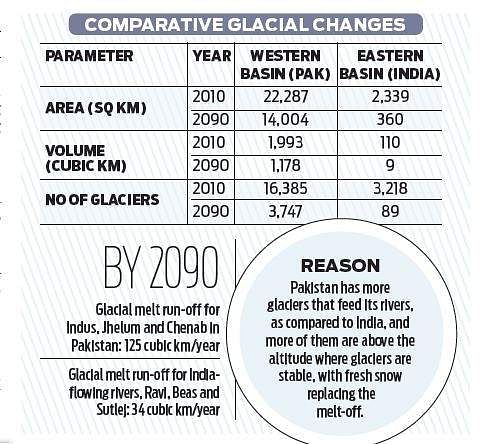 Now we are on Telegram too. Follow us for updates
TAGS
India pakistan Indo-Pak conflict