India becomes the second country in the world after the United States of America to develop hypersonic technology.

BHUBANESWAR: In a path-breaking move, India on Wednesday conducted the first test of Hypersonic Technology Demonstrator Vehicle (HTDV) from a defence test facility off Odisha coast setting the perfect ground for the development of long-range cruise missiles.

Mounted on an Agni series missile, the technology demonstrator vehicle was launched in autonomous mode from the world-class missile complex located at Kalam Island at about 11.27 am, informed defence sources.

Thrust by scramjet engine, it can cruise at Mach 6 and have multiple civilian applications, including the launch of satellites at low cost and long-range cruise missiles.

Defence authorities claimed that the vehicle was launched successfully and India became the second country in the world after the US to have developed the hypersonic technology.

“The maiden launch of the technology demonstrator vehicle has been successful. Data generated during the mission are being analysed.

We are trying to achieve what no country has attained. The vehicle will help prove a number of technologies for futuristic missions,” an official told ‘The Express’. 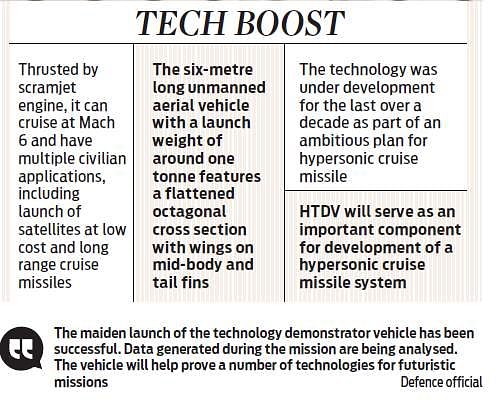 The six-metre-long unmanned aerial vehicle with a launch weight of around one tonne features a flattened octagonal cross-section with wings on mid-body and tail fins.

The scramjet engine is placed at the mid-body while the portion towards the tail serves as exhaust nozzle.

In between, there is a rectangular component of about 12-foot for air intake.

The technology was under development for the last over a decade as part of an ambitious plan for a hypersonic cruise missile.

The Indian missile arsenal already boasts of BrahMos cruise system, developed jointly with Russia, which is supersonic in nature and can travel at a speed of Mach 2.8.

The HTDV will serve as an important component for the development of a hypersonic cruise missile system. A long-range missile with hypersonic technology could be a strategic killer.

After a couple of laboratory tests, the initial flight of the vehicle was aimed at validating the aerodynamics and aero-thermodynamics of the air vehicle and performance of the scramjet engine along with the guidance system.

The mission involved the launching of the hypersonic air-breathing cruise vehicle at an altitude of 25 km with the help of a rocket.

Now we are on Telegram too. Follow us for updates
TAGS
India India hypersonic technology HTDV Hypersonic Demonstrator Vehicle