The minister asked her not to make this sensitive matter a “prestige issue” and to ensure an “amicable end” to the stir even as he appealed to the agitating doctors to resume work so that patients did not suffer.

“Strike is certainly not the best way to protest. Patients should not be deprived of immediate and emergency healthcare facilities,” Vardhan said.“It is a matter of concern that the agitation of the doctors in West Bengal is not heading towards a resolution but seems to be getting aggravated.

Better communication with the doctors and a compassionate approach to take care of the genuine problems being faced by them in day-to-day functioning would definitely be helpful in tiding over the crisis which has been created,” Vardhan said in a letter to Mamata, urging her to intervene and resolve the impasse and take steps to provide a secure working environment for doctors.

The minister also condemned the “unruly behaviour and assault on doctors”. He said he would discuss the issue of providing safety to hospitals with the Home Ministry and the states so that such incidents do not occur in future.

Vardhan also urged patients and their family members to support doctors in performing their duties and not resort to violence.

“Doctors are an integral pillar of society and often work under stressful and difficult conditions. I appeal to all patients and their care-givers to observe restraint,” he said.

The Bengal doctors, protesting over the assault on a junior colleague, have hardened their stance after Mamata visited SSKM Hospital on Thursday and warned striking junior doctors of taking strict action if they did not resume work within the deadline that she had set and labelled them as outsiders enjoying the support of the BJP and the CPM. 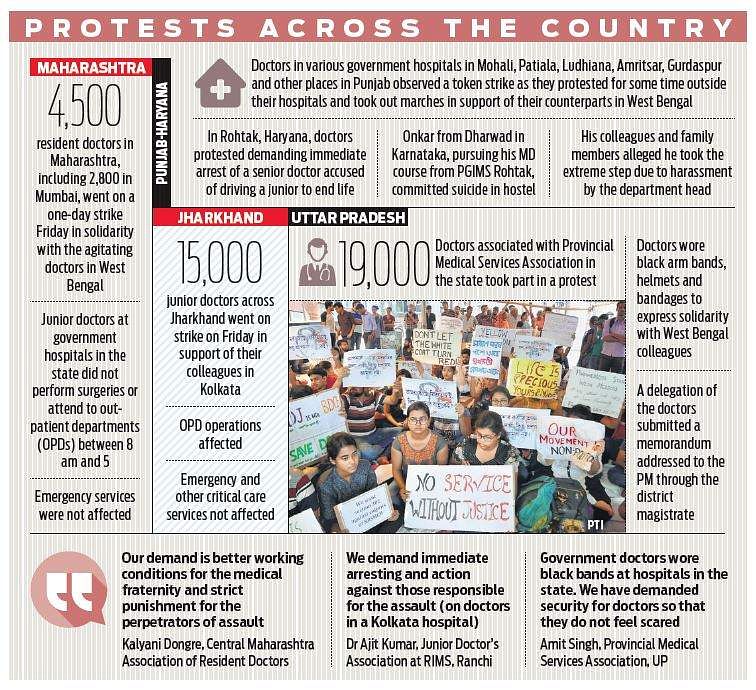