A total of nine tigers, 21 elephants and six leopards were found dead from 2014 to May 31, 2019, due to infighting and clashes over mating, the study stated.

NEW DELHI: In a bizarre development at Uttarakhand’s Jim Corbett National Park, tigers have been killing young elephants and in some cases eating them, according to an official study.

A total of nine tigers, 21 elephants and six leopards were found dead from 2014 to May 31, 2019, due to infighting and clashes over mating, the study stated. “Out of the total 36 cases for the three species, 21 were reported in case of wild elephants alone. However, a very surprising aspect was that around 60 per cent of wild elephant death cases (13) were due to attack by tigers mostly on young ones,” it said. 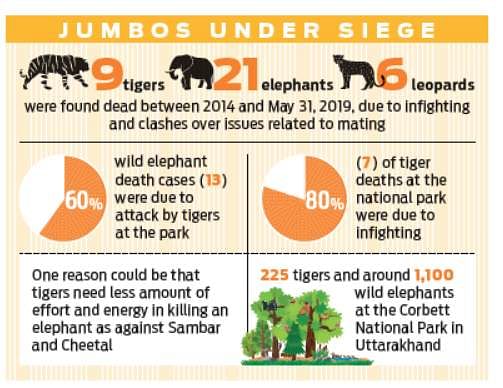 Calling the trend worrisome, director of the national park, Sanjiv Chaturvedi said, “One of the reasons could be that tigers need comparatively less amount of effort and energy in killing an elephant as against that needed in hunt of species like Sambar and Cheetal. Killing elephant results in the large quantum of food for them too.”

Even in cases where elephants were killed in infighting, tigers were found eating their body parts, the study said. Wildlife activist Ajay Dubey said, “It is really surprising and worrying that tigers are eating elephants. Authorities must look into this aspect and take necessary steps.”
Tigers have very strong territorial instincts which cause infighting that led to seven of the nine tiger deaths during the five years period.

In the case of leopards, there were six deaths because of infighting. “Out of four cases, in two cases, there was definitive evidence of killing by tigers but in rest of two cases, the exact identity of attacking species is yet to be established,” the study revealed. The study was conducted in the wake of the death of a tigress on May 27, 2019, because of infighting.

Now we are on Telegram too. Follow us for updates
TAGS
Jim Corbett National Park