We are not bothered about a few corrupt and greedy leaders who are switching to some other party, West Bengal Chief Minister Mamata Banerjee said.

KOLKATA: Stung by the mass defections of Trinamool councillors and MLAs to the BJP, party chief and West Bengal Chief Minister Mamata Banerjee came down heavily on them, calling them thieves, greedy and traitors and said the saffron party was collecting Trinamool’s “garbage”.

“I don’t care if 15-20 councillors leave the party and join the BJP for money or any other purpose. If party MLAs want to leave, they can. We don’t want thieves in our party. If one person leaves, I will prepare 500 more,” she thundered at a review meeting with Trinamool councillors, convened a day after 12 Trinamool councillors and a legislator joined the BJP.

The ruling party in West Bengal has witnessed mass exodus of its councillors to the BJP since the Lok Sabha election result was declared. Ten MLAs have also switched over to the saffron camp. The first massive exodus took place on May 28, when more than 50 Trinamool councillors and two MLAs joined the BJP in Delhi. 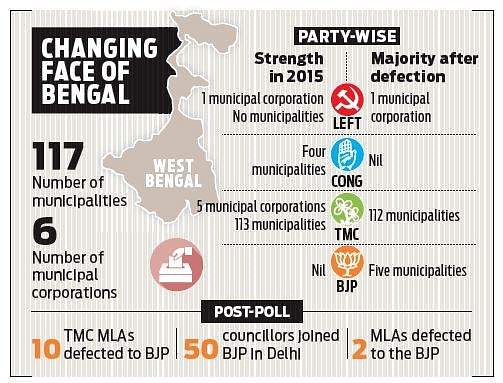 “These councillors misused government funds granted for the development of their areas. Their act was caught during audit process… Now the corrupt councillors are joining the BJP…They are thinking they will survive. But I will not spare them,” Mamata said.

With the defections, the BJP has now secured majority in five municipalities.

Now we are on Telegram too. Follow us for updates
TAGS
TMC Bengal BJP defection Mamata Banerjee