Jumbos to travel in train for four days this summer for Jagannath Rath Yatra, activists livid

It was learnt Assam’s forest department has approved the animals’ transportation while the Gujarat government has issued the no-objection certificate.

GUWAHATI: With their vision blinkered, they will simply refuse to notice the elephant in the room. Despite reports of killer heatwave across India, the Assam government is going ahead with its plan to transport four elephants for the Jagannath Rath Yatra in Ahmedabad.

Belonging to private parties, these domesticated jumbos will be transported almost 3,000 km for four days from Assam’s Tinsukia in a railway wagon.

Usually, elephants are leased out for six months for such purposes but there is not a single instance of them being brought back after the expiry of lease period. According to the forest department, some attendants will be engaged to periodically spray water on the elephants during their transportation. Some vets will also look after the jumbos.

“We have plans to transport the elephants in a wagon which will be attached to a passenger train. However, we haven’t yet got the wagon (from the railway),” Conservator of Forest, Ranjan Kumar Das, told this newspaper. 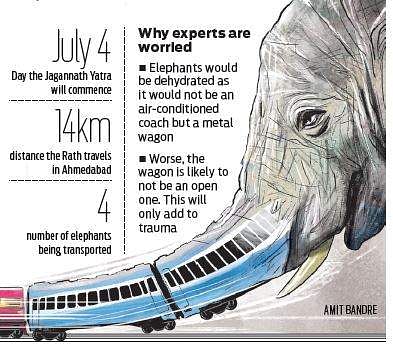 It was learnt Assam’s forest department has approved the transportation, while the Gujarat government has issued the no-objection certificate. When contacted, an official of Animal Welfare Board of India said the matter would be brought to the notice of secretary Dr. Neelam Bala. “We can’t help you. You can approach Assam’s forest department by filing an RTI application,” the official said.

Elephant experts are livid at this “inhuman” plan of the Assam government. “We accept that the transportation was allowed within the purview of law. But is it right to transport them in such heat?” asked Kaushik Barua, who is an elephant expert. “A man travelling to Coimbatore by a train recently died due to heat. Some of the elephants are juveniles. If they are transported, this will be a cruel and inhuman.”

Cruelty: Elephant owner, mahout face court ire
A court in Chhattisgarh’s Raigarh district sent the owner and a mahout of an elephant to jail for inflicting cruelty and ill-treatment. The pachyderm was used for entertainment and begging in the streets. It had later died at Sarangarh.

Now we are on Telegram too. Follow us for updates
TAGS
elephant animal cruelty Jagannath Rath Yatra