The Opposition raised doubts on the authenticity of figures quoted in the Maharashtra Economic Survey tabled in the legislature on Monday.

MUMBAI: The Opposition raised doubts on the authenticity of figures quoted in the Maharashtra Economic Survey tabled in the legislature on Monday. The survey showed Gross State Domestic Product (GSDP) rate for 2018-19 to be 7.5 per cent while the Indian economy is expected to grow at 6.8 per cent, except for a two per cent rise in the construction sector, others like mining, manufacturing and utility are showing a downward trend, the survey revealed.

Former Maharashtra chief minister and senior Congress leader Prithviraj Chavan said the agricultural growth rate had been revised by “almost 12 per cent” in connection with the 2017-18 fiscal, a change he dubbed as “drastic”. 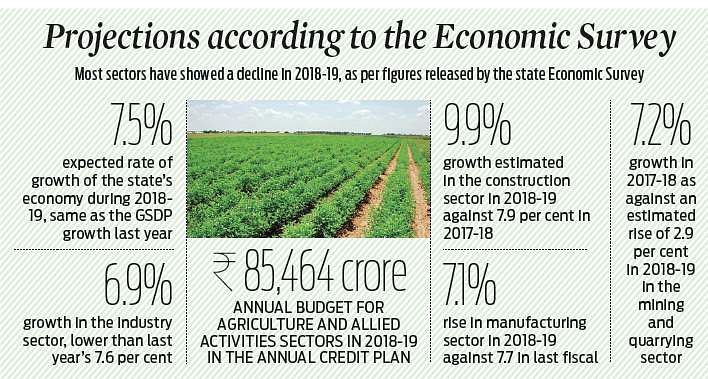 “Even as Maharashtra strives to be a trillion dollar economy by 2025, most of the sectors that will propel this growth showed a decline in 2018-19,” the opposition said. Speaking at the Vidhan Bhavan, Finance Minister Sudhir Mungantiwar argued that the decline in agricultural production was due to the four-year drought and sluggish growth in other sectors of the economy due to the global recession. He defended the GSDP projection claiming that investment in several sectors was still underway and the economic picture would be better in the future.

“The growth in trade, hospitality, communication, financial and professional services, public administration, defence and other services are estimated to rise when compared to 2017-18. This means jobs are being created in these sectors as well. Growth cannot be seen only through investment in select sectors,” Mungantiwar said. According to the Economic Survey, deficient rainfall in 2018 has seen a sharp fall in kharif and rabi crop production.

However, the same year has seen a rise in sugarcane production — a 10 per cent rise from 83.138 metric tonnes in 2017-18 to 91,704 metric tonnes in 2018-19. Leader of Opposition Dhananjay Munde has demanded a joint committee of members from both the houses to examine the Economic Survey data. He argued that leading economists and statisticians world over has in March 2019 argued that the economic data that is presented is inflated.  The same view was endorsed by an economic adviser to the Centre Arvind Subramanyam.

“As per the Economic Survey of 2017-18, the estimated agriculture development rate was minus 8.3 per cent. But in the Economic Survey report 2018-19, this has been revised to 3.4 per cent. It is impossible to have such a big change of almost 12 per cent,” Congress leader Prithviraj Chavan said

Now we are on Telegram too. Follow us for updates
TAGS
Prithviraj Chavan Gross State Domestic Product GSDP