A central team had mentioned the lack of manpower despite the epidemic and criticised the state system for not being prepared at peripheral levels and at SKMCH during the peak AES season.

MUZAFFARPUR: With the death toll climbing to 121, Shri Krishna Medical College Hospital (SKMCH) authorities on Thursday converted a ward for prisoners into a pediatric intensive care unit, even as the Bihar government moved to rectify the manpower deficiencies pointed out by a Central team last week.
Over 200 health officials and personnel, including doctors on deputation, remained on their toes whole day but could not save the lives of six children, including four minor girls. However, with the rush fading and lower admissions on Thursday, doctors have heaved a sigh of relief.

SKMCH superintendent Dr SK Shahi said an ICMR team has also been deployed following the directive of Union health minister Harsh Vardhan to operationalise the proposed virology laboratory. He added, a multi-disciplinary team of experts has already been assigned to compile records of suspected AES cases, adding doctors from AIIMS, Delhi and other medical colleges were assigned to tide over the manpower crisis.

A central team had mentioned the lack of manpower despite the epidemic and criticised the state system for not being prepared at peripheral levels and at SKMCH during the peak AES season.

It also pulled up the hospital for not putting in place a standard operating procedure to treat such cases. The state is likely to post technicians and install an MRI facility within a fortnight even as a 100-bed pediatric intensive care unit is likely to be functional soon.

The central team had pointed to lack of essential drugs and space in paediatric intensive care unit, besides the idle equipment, low number of para-medical and nursing staff, besides doctors to handle cases of hypoglycemia or revive dying patients, besides the failure of the hospital to properly document the cases by taking cerebrospinal fluids for tests. 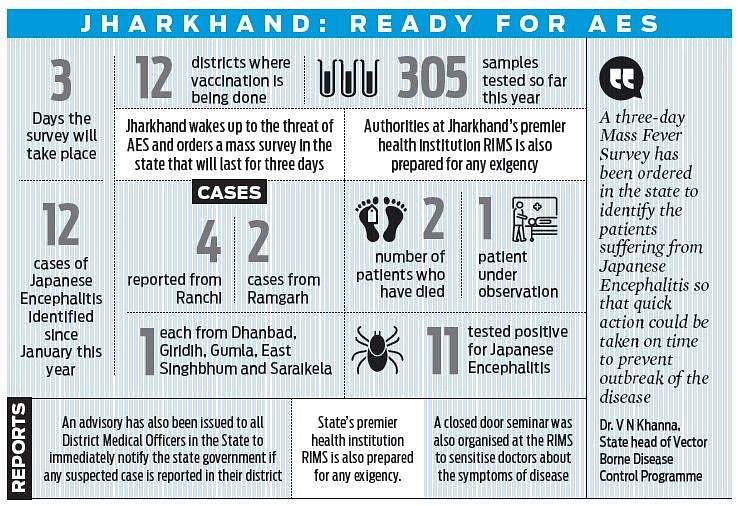 Now we are on Telegram too. Follow us for updates
TAGS
AES encephalitis Shri Krishna Medical College Hospital