A former driver of the ill-fated bus said this route has a scarcity of state-run buses so commuters opt for private buses.

CHANDIGARH: On an average 1,200 people die in road accidents in Himachal Pradesh annually and this year in the first five months 430 people have already lost their lives in 1,168 road accidents. Of these accidents, 93.61% were caused by human error. The main reasons for these mishaps are rash driving, speeding, dangerous overtaking, slippery and uneven roads, and drunken driving besides others.

As per the data available from Road Accident Data Management System this year till May 31, 430 lost their lives and 2,155 were injured in 1,168 accidents. While last year 1,168 people died and 5,444 were injured in 3,119 accidents and in 2017 in 3,119 accidents, 5,338 people were injured and 1,176 died.
The Himachal Road Transport Corporation (HRTC) has identified 169 accident prone spots in the state and has shared the list with the state PWD department for remedial action. Besides 90 black spots have been identified by the HP Police and of these 71 have been rectified by the PWD department, said sources.

The ill-fated private bus which skidded off the road and fell into a 300 m deep gorge near Dhoth Morh area in Banjar tehsil in Kullu district was a 20-year old vehicle and the cause of the accident was brake failure. The 44-seater bus was carrying 79 passengers. Of the 35 injured, eight have been referred to PGI at Chandigarh and the total fatality is now 44. Most of the victims were residents of various areas in Kullu district and were cremated today.

A former driver of the ill-fated bus said this route has a scarcity of state-run buses so commuters opt for private buses.

Chief Minister Jai Ram Thakur visited the regional hospital in Kullu to enquire about the well being of the injured persons of the bus accident that took place near Banjar area of the Kullu district on Thursday evening. He interacted with all the injured and assured that the state government would provide them best health care facility.

Thakur said that the state government would take more effective steps to check such incidents and stern action would be taken against the bus owners found guilty of overloading. 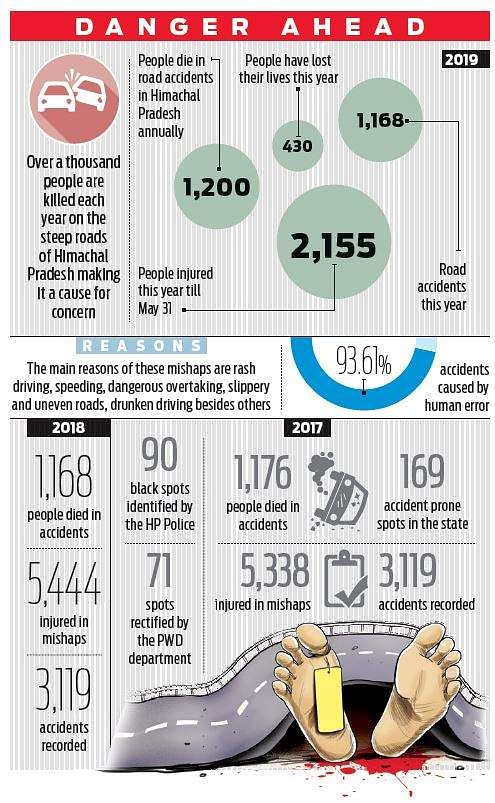