IAF acknowledges of bombing Pakistani intruders in Kupwara during 2002 raids

Talking about the Pakistan Air Force responding to the Balakot airstrike on February 27 after India struck the Jaish camps, the air chief said the Pakistani jets did not enter the Indian airspace.

NEW DELHI: In its first acknowledgement of using strategic air power against Pakistan before the Balakot airstrikes, the Indian Air Force on Monday said it had used fighter jets to bomb Pakistani bunkers and evict the enemy, who had entered 3-4 km inside the Line of Control (LoC) in Kel area north of Kupwara, in 2002. 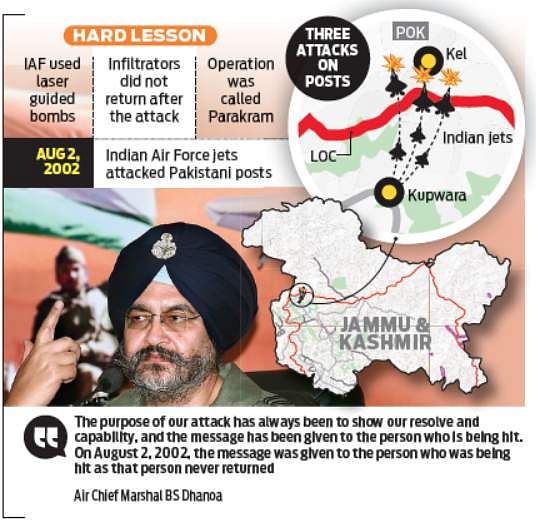 Air Chief Marshal B S Dhanoa and the Air Officers Commanding-in-Chief of Central and Western Commands were in Gwalior to commemorate 20 years of the bombing of Tiger Hill by the IAF during the Kargil war in 1999.

The air chief said that once hit by the IAF, the message went loud and clear and the Pakistani intruders did not return.

“The purpose of our attack has always been to show our resolve and capability…,” Dhanoa said.

The operation took place on August 2, 2002, at a time India-Pakistan ties had reached a brink following the December 2001 Parliament attack and there was massive military mobilisation on both sides of the border.

The nine-month-long operational deployment of Indian forces in January 2002 against Pakistan was named as Operation Parakram.

Talking about the Pakistan Air Force responding to the Balakot airstrike on February 27 after India struck the Jaish camps, the air chief said the Pakistani jets did not enter the Indian airspace.

Now we are on Telegram too. Follow us for updates
TAGS
Indian Air Force IAF Balakot Air Strikes Line of Control 2002 Kupwara Bombing