The BJP’s loss of nine seats in Uttar Pradesh was more than offset by the big gains it made in West Bengal and Karnataka as compared to the 2014 elections.

NEW DELHI: The BJP’s loss of nine seats in Uttar Pradesh was more than offset by the big gains it made in West Bengal and Karnataka as compared to the 2014 elections.

In 2014, the party had won two seats in West Bengal which sends 42 MPs to the Lok Sabha. The BJP has made major inroads in the state, gaining 16 more seats this time and increasing its vote share from 17% to 40%.

The seats of ruling Trinamool has shrunk from 34 to 22, while its vote share recorded a slight increase from 39.79% to 43.28%. The Left which ruled the state for almost three decades has failed to get any seat.

In Haryana, the BJP managed a clean sweep winning all 10 seats, up three from seven in 2014, while its vote share also saw a significant increase from 35% to 58%. 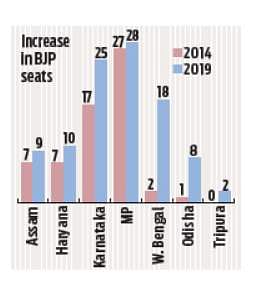