The Coordinating Committee on Manipur Integrity, which is spearheading the protests, had asked the Centre to disclose the details before November 4.

GUWAHATI: The Manipur government has appealed to protestors to withdraw their November 4 deadline served on the Centre demanding the disclosure of details of Naga talks.

Manipur Deputy Chief Minister Y Joykumar Singh told the protestors that the state government was fully committed to safeguard people’s interests and that any attempt to alter the state’s territorial and administrative integrity would not be accepted.

The Coordinating Committee on Manipur Integrity (COCOMI), which is spearheading the protests, had asked the Centre to disclose the details before November 4.

The Deputy CM said Union Home Minister Amit Shah had assured an all-political party delegation, which met Central leaders in New Delhi, that all stakeholders including Manipur, Assam and Arunachal Pradesh would be consulted before singing the final Naga settlement.

He invited the protestors for talks on the issue. However, they are not amused as they have stuck to their guns.

In a joint memorandum submitted to Prime Minister Narendra Modi, the all-party delegation sought an assurance from the Centre that a resolution of the Naga issue would guarantee an end to “extortions and illegal taxations by Naga insurgents”.

It also insisted that “any final peace accord should not compromise in any way the territorial, administrative and political integrity of Manipur”.

The fear stems from the demand of Naga rebels for the creation of a unified Naga homeland, called Greater Nagaland, by integrating the Naga-inhabited areas of Manipur besides Assam and Arunachal Pradesh with Nagaland. The three neighbouring states have sizeable Naga populations and they will be affected in case the Centre accedes to Greater Nagaland demand. 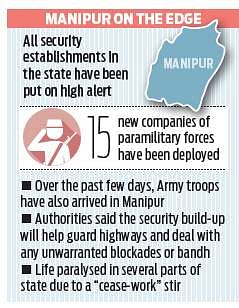 Meanwhile, opposition Congress in Arunachal has sought an all-party meeting with the stakeholders. In a letter to Chief Minister Pema Khandu, the party urged the state government to make its stand clear on the issue before any final decision was made by the Central government.

The Manipur government has asked banks to freeze the accounts of separatist leaders Yamben Biren and Narengbam Samarjit.

Recently, the duo, hailing from the state, had announced the launch of “Manipur government-in-exile” in London.

The state’s Home department issued a directive seeking the immediate freezing of bank accounts of the two separatist leaders who have since been booked by Manipur Police. The government suspects they could use the money for “wrongdoings and unlawful purposes”.

While announcing the launch of the government-in-exile, Yamben Biren and Narengbam Samarjit had claimed they were representing Manipur’s titular king, Leishemba Sanajaoba. However, the king distanced himself from the London announcement.

Now we are on Telegram too. Follow us for updates
TAGS
Naga peace accord Manipur activists Naga talks Y Joykumar Singh