Resigning before you could say Devendra Fadnavis: India's shortest-serving CMs

The three-day tenure of Devendra Fadnavis has got him a spot in the list of India’s shortest-serving Chief Ministers.

If you thought Devendra Fadnavis' 80-hour stint as the Chief Minister of Maharashtra was the shortest in any Indian state, think again! He only makes third place in this dubious list.

Saying Ajit Pawar's withdrawal of support deprived him of the numbers to form the government, Fadnavis tendered his resignation to Governor Bhagat Singh Koshyari.

Here's a look at the list of India’s shortest-serving Chief Ministers.

On 18 March 2016, nine Congress MLAs rebelled against Harish Rawat, reducing the Congress-led Government in Uttarakhand to a minority after which President's Rule was imposed in the state, making Rawat chief minister for one day.

Former Congress Party leader and currently a BJP MP, Jagdambika Pal got to be the Chief Minister of India's largest state Uttar Pradesh for just two days in 1988.

After becoming only the second Chief Minister of Maharashtra to serve a full five-year term, Fadnavis could not even last five days in his second term. 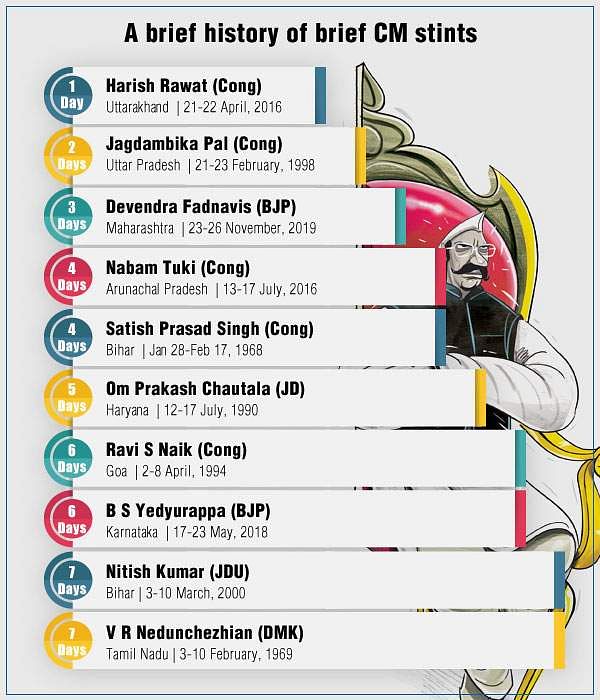 When Satish Prasad Singh became the Chief Minister of Bihar in 1968, he was the youngest ever to have led the state. He headed a coalition government led by Soshit Samaj Dal and supported by Congress but it lasted only for five days.

The INLD veteran held the CM post for five days from July 12 to July 17, 1990. The following year, he had another short stint as Chief Minister from March 22 to April 6.

The Congress leader was Chief Minister of Goa for barely six days in 1994. However, his first term as CM had lasted considerably longer from January 1991 to May 1993.

In 2018, the Yeddyurappa-led BJP could not muster the required numbers ahead of the floor test in the Karnataka assembly and fell after just six days. The HD Kumaraswamy-led JD(S)-Congress subsequently took over the state's administration. However, Yeddyurappa was back as CM of Karnataka after the JD(S)-Congress alliance collapsed in 2019.

Stay up to date on all the latest Nation news with The New Indian Express App. Download now
(Get the news that matters from New Indian Express on WhatsApp. Click this link and hit 'Click to Subscribe'. Follow the instructions after that.)
TAGS
Devendra Fadnavis Shortest Serving Indian CMs Jagdambika Pal Satish Prasad Singh