BHOPAL: At least six passengers, including a kid died, while 15-20 others were injured, seven of them critically when the bus they were boarding plunged into the Richhan river in Raisen district on Wednesday-Thursday intervening night.

The bus operated by Om Sai Travels was on its way to Chhatarpur district from Indore via Bhopal, when it suddenly plunged into the river in Raisen district at around 1.30 am.

According to Pankaj Soni, one of the survivors, the bus, which was running at a high speed, possibly hit a road divider, then overturned twice before falling into the river after breaking off the bridge's railings.

Local residents rushed to the spot and started rescue operations. 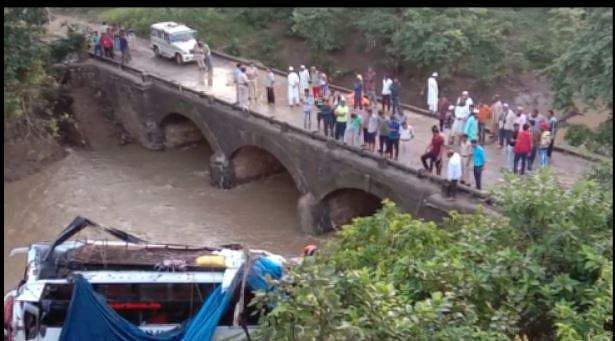 A team of home guards, police and SDERF personnel rescued 15-20 injured passengers. The injured were admitted at Raisen District Hospital from where critically hurt passengers were referred to Bhopal.

The bus had 40-45 passengers when the mishap happened.

"As of now six passengers, including a kid, have died. Since no accident with any other vehicle happened, it's possible that the bus plunged into the river at a high speed after the driver lost control over steering as he suddenly felt sleepy. Actual cause can only be known after the bus is retrieved from the water body," SP of Raisen district Monika Shukla told The New Indian Express.

Immediate assistance of Rs 10,000 each has been sanctioned by the Red Cross.