Inducting Rafale ‘important development’ for IAF, will be game changer for India: Experts

Rafale, which is not only unmatched with its ability to suppress and blind enemy sensors and radars, can also engage enemy aircraft or ground targets, while remaining much inside Indian airspace.

NEW DELHI: The long-awaited induction of the Rafale fighter jets marked an important milestone for the Indian Air Force (IAF), with Defence Minister Rajnath Singh presiding over the handover ceremony in France, Tuesday.

With this, India has introduced a game-changing technology vis-a-vis its two immediate western and northern neighbours with Singh underlining the IAF philosophy and its significance.

“I believe Rafale will boost India’s air dominance exponentially to ensure peace and security in the region,” Singh said.

India has contracted 36 (two squadrons) Rafale Fighters at a whopping Rs 59,000 crore after long-winded negotiations which began in 2006 but was only finalised in 2016. It has taken 13 long years for the first fighter to join the force.

Air Marshal VK Bhatia (Retd), security analyst, called it an ‘important development’ in the light of attrition of IAF fighter squadrons, which have of late come down to 30 from the sanctioned and required 42 to fight a two-front war, given the threat analysis and the complicated security environment around the country. 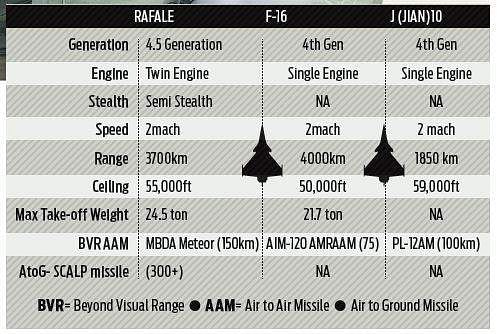 “The IAF had been waiting for this induction for long years given the major depletion of its combat capability,” Air Marshal Bhatia said. He added: “Rafale has fantastic combat punch as it is a multi-role aircraft-each unit capable of fighting the enemy in the air and also conduct precision strikes with its electronic warfare capability from stand-off range. It is a game-changer in the subcontinent.”

Military aviation experts say the electronic warfare capability of the Rafale jets is unmatched with its ability to suppress and blind enemy sensors and radars. It can not only penetrate enemy territory but also retains the choice of engaging enemy aircraft or ground targets, while remaining much inside Indian territory.

Rafales can take a 14.5 ton of load and has14 external pods for extra fuel tanks, missiles and bombs. It is armed with the MBDA Meteor air to air missile with a range of 150 km which it can fire with the help of its radar from beyond the visual range.

The fighters are also loaded with Air to Ground SCALP missile capable of hitting enemy targets much beyond 300 kilometres, which, in a way, sweeps the entire territory of Pakistan without crossing over to the enemy side.“But it is just the beginning. Numbers do matter,” feels Air Vice Marshal Manmohan Bahadur (Retd), the Additional Director General of the Centre for Air Power Studies.

“Rafale is good but we also have to look for all-round augmentation of capability. Thirty-six Rafales are a good addition, but much more is needed,” he said.While very potent weapons, missiles and air platforms are in the process of joining the force, the future plan is to push for ‘Make in India’ via the transfer of crucial technologies to support India’s strategic autonomy.

Of the 22 Apache 64E attack helicopters, 8 have been inducted, while four of the 15 heavy-lift Chinook Helicopters (CH 47F) have also joined the force.Will Apaches are good at strafing enemy ground formations, Chinooks would help faster troop inductions into high altitude battlefields with its carrying capacity of 9.6-ton cargo, including heavy war equipment, artillery guns and even light armoured vehicles.

To add, while India mulls over the offers from among Saab Grippen, SU-35’s, F-16’s and its other variant F-21, besides Rafale and Tornados to induct 110 fighters, the IAF has pressed for rapid induction of 123 Indigenous LCA Tejas (MK-1 & MK-2) to replace the ageing MiG-21 Bisons and the Mirage-2000’s.

READ: First Rafale jets to be seen in Indian skies in May 2020

With air defence strategies being prepped, the strategic S-400 Triumpfs from Russia, despite US objections, are designed to revamp India’s capability to meet long-range missile threats. Complementing it are recent inductions of the Brahmos supersonic missile and its refinements for use by the IAF and the Navy. Brahmos is to be loaded on to 40 Su30 MK’s to give an unmatched punch to the IAF.

The Akash, Prithvi series of missiles are in induction mode while the testing of the Astra, a BVR missile has added to the IAF firepower. The Astra is to be used also by the Tejas air and naval platforms also.
Air Chief Marshal RKS Bhadauria made it clear during his first address to the media on the eve of Air Force Day that ‘Make in India’ will be his thrust area.

“The Fifth Generation Fighter Aircraft (FGFA), he said will be the indigenous Advanced Medium Combat Aircraft (AMCA), for which work has already started.”

IAF is already using an indigenous Airborne Early Warning & Control aircraft, while Indigenous trainer jet HTT-40, designed and developed by HAL, will soon be joining the IAF.” said the Chief.Of the 110 fighters to join the IAF in future, 85 per cent of them will be produced in India with a Strategic Indian Partner, the IAF has announced.

Stay up to date on all the latest Nation news with The New Indian Express App. Download now
(Get the news that matters from New Indian Express on WhatsApp. Click this link and hit 'Click to Subscribe'. Follow the instructions after that.)
TAGS
Rafale fighter jets IAF Indian Air Force Rajnath Singh Rafale jets Dassault Aviation France