Shivakumar, 57, was arrested by the ED on September 3 in the money laundering case.

NEW DELHI:  The Delhi High Court on Wednesday granted bail to Karnataka Congress leader
D K Shivakumar, who was lodged in Tihar Jail in connection with a money laundering case filed by the Enforcement Directorate (ED).Justice Suresh Kait said the Congress leader was entitled for grant of bail as no material has been shown to indicate that he was a flight risk. 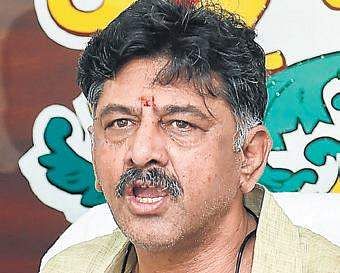 Earlier in the day, Congress interim president Sonia Gandhi met Shivakumar at Tihar Jail. She was accompanied by party leader Ambika Soni.In a 19-page judgment, the court said Shivakumar, cannot tamper with evidence as the documents related with the ongoing case is with the investigating agencies already. The court also took note of Shivakumar’s medical condition and noted that he remained in ICU for four days and angiography was also performed on him.

The court  said the Congress leader was not in power and there was no evidence to show that he or his family members or close associates attempted to influence witnesses.The court directed that he be released on bail on furnishing a bond of `25 lakh and two sureties of like amount. The other conditions laid down by the HC while granting him bail included not leaving the country without the trial court’s permission, making himself available for interrogation when required and not to influence the witnesses.

Karnataka MLAs justify resignation
The 17 disqualified MLAs of Karnataka told the Supreme Court that they had every right to resign and the decision taken by the then Speaker Ramesh Kumar to disqualify them smacked of arbitrariness. Kumar had violated the SC order, they contended.