Driving without helmet? Your license might get disqualified as states gear up for new traffic violation fines

To be implemented from today; transport ministry officials say the new traffic penalties are aimed at controlling violations on roads.

NEW DELHI: The Ministry of Road Transport and Highways will implement around 63 clauses of the amended Motor Vehicles Act from Sunday across India. Most of these clauses will impose heavy penalties on traffic violations. Ministry officials say that the implementation of the new clauses is not with the aim to generate revenue but to ensure safety of commuters on the road. “The Act was amended keeping in view the ministry’s priority to improve road safety. The heavy fines that violations will attract will deter commuters from violating rules and in turn promote road safety,” a ministry official said. 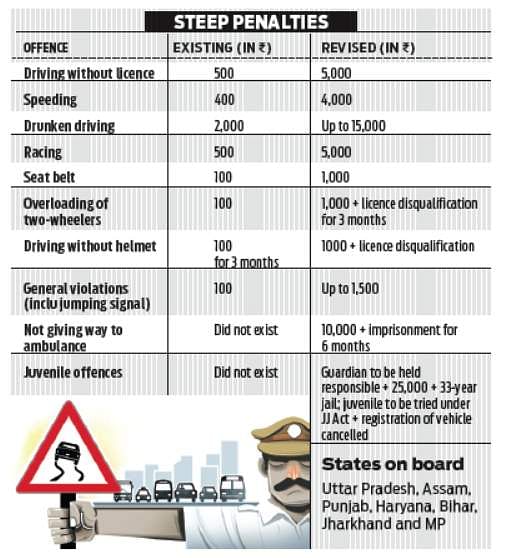 The implementation will be a challenge as states have full authority on whether or not to implement the clauses. “Transport being a state subject, it is within their jurisdiction to enforce the new clauses. But we are confident that the states will enforce the clauses,” the official said.
Some of the new penalties which will come into force include Rs1,500 for general offences (previously Rs 500), Rs 1,000 for rules of road regulation violations (previously Rs100), Rs 500 for ticketless travel (Rs 200 previously) among others.

The Centre, earlier this week, notified the 63 clauses that would come into effect. While some states have decided to implement the new rules, others will not implement them and a few are still undecided. While states like Uttar Pradesh, Assam, Punjab, Haryana, Bihar, Jharkhand and Madhya Pradesh are on board, others have opposed the huge penalties. Chhattisgarh is yet to decide on the implementation of new regulations of the MV Act. “The state is analysing the amended provisions of the Act and yet to take a call on it,” a senior officer said. The state feels that new guidelines have to an extent curtailed its regulatory powers.

“It is our responsibility to stop accidents but the fine should not be so much that the person is not able to pay. Some of the penalties are higher than the cost of second hand vehicles,” Rajasthan transport minister Pratap Singh Khachariyawas said, “The Act will not be implemented as of now. We are not on the same page over the huge fine on the drivers,” said West Bengal transport minister Subhendu Adhikari, adding that the state has an objection to the clause that car manufacturers will be entitled to give vehicles fitness certificate.

Now we are on Telegram too. Follow us for updates
TAGS
traffic rule violation Traffic fine Traffic violation fine