The core-sector slowdown was primarily due to contraction in production in coal, crude oil, natural gas and petroleum refinery products.

NEW DELHI: In what may be an indicator of how wide the economic slowdown has spread — and how deep can it go from here — government data released on Monday showed the growth of the crucial core industries plunged to 2.1% last month compared with 7.3% in July 2018.

The core-sector slowdown was primarily due to contraction in production in coal, crude oil, natural gas and petroleum refinery products.

“These are signs of a major slowdown in the economy. Not only retail but industrial demand has also been affected,” said Prof. Biswajit Dhar of JNU, adding that this is in line with global trends. “Germany grew 0.1% in the June quarter and 2019 Euro-zone growth forecasts have been trimmed from 0.4% to 0.2%,” he added.

According to Commerce Ministry data, coal production declined by 1.4% in July, while crude dropped 4.4%. Natural gas production and refinery products contracted by 0.5% and 0.9%, respectively. However, fertiliser grew 1.5% and steel by 6.6%. Cement production expanded 7.9% while electricity generation rose 4.2%.

Meanwhile, the country’s manufacturing sector activity declined to its 15-month low in August, a monthly survey said on Monday (see graphic).According to finance ministry sources, the government is worried if the ongoing slowdown will hit revenues.

The government has already lowered its projections for GST collections in the Budget for 2019-20 to Rs 6.63 lakh crore from the Interim Budget’s mop-up target of Rs 7.6 lakh crore. But the average GST collection per month still remains below Rs 1 lakh crore.

Steady fall
Core industries were showing signs of weakness since the start of this financial year — from 5.2% in April to 4.3% in May and further to 0.7% in June

Growth halves
In the first half of this fiscal (April-July 2019),  the eight core sectors grew just 3%, compared with 5.9% growth in the same period last year 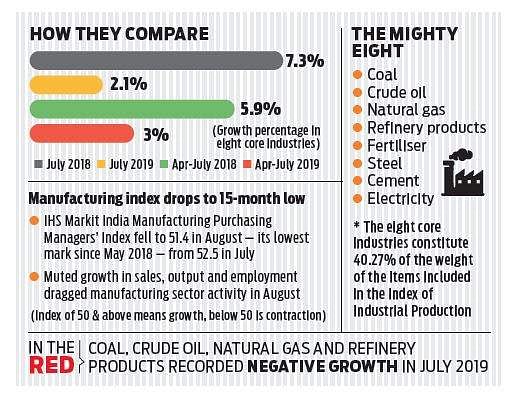 Now we are on Telegram too. Follow us for updates
TAGS
economic slowdown industry growth