Chandrayaan 2: Here's what will happen during the ‘terrifying 15 minutes’ when moon lander will be on its own

Well, here’s why. ISRO scientists will not resort to remote manual control of the lander while it makes the descent to the lunar surface.

BENGALURU:  While the Chandrayaan-2 mission has so far progressed with textbook precision, Indian Space Research Organisation (ISRO) scientists are now waiting with bated breath and fingers crossed, wishing that the mission’s lander Vikram makes a perfect landing to achieve the historic first of a spacecraft touching down near the moon’s south pole — something that no country has done before. That’s because of the crucial 15 minutes of powered descent, which ISRO chairman K Sivan had earlier described as “most terrifying”, but had not explained why.

Well, here’s why. ISRO scientists will not resort to remote manual control of the lander while it makes the descent to the lunar surface. Instead, the lander Vikram will manage its own landing in an automated mode, using its on-board sensors to guide it to the perfect landing spot, a senior ISRO scientist informed The New Indian Express. These sensors are more sophisticated versions of the reverse gear hazard alert sensors installed in the latest models of cars.

ALSO READ | Everything going according to plan, ISRO chief on proposed soft landing of 'Vikram' module 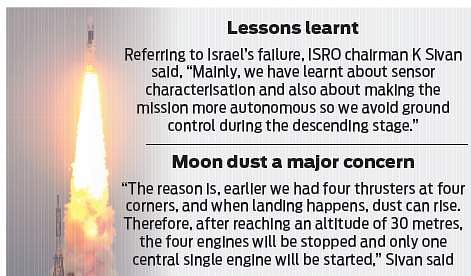 Apart from guiding, the sensors will also help Vikram “choose” the most ideal surface to safely land by linking with its lunar surface scanning and imaging capability as it approaches to make a soft-landing.

“There will be no remote manual commands guiding the lander from the Earth-based control stations during the crucial 15 minutes as had been done so far,” the scientist said, adding that any error on the part of the sensors can lead to a problem.

“This will be made possible as the parameters and commands for the sensors are loaded remotely into the lander’s system only an hour before the landing begins,” he said. “And once the process starts, there is no re-calculation or tweaking possible.” ISRO chief Sivan said that to land on the lunar surface, Vikram will have to reduce its velocity from of 1.6km per second to zero in a controlled manner by using its thrusters from 800 metres above the surface.

‘Soft-landing has success rate of 37%’

ISRO chief Sivan  said the four thrusters too are new technology for the scientists and so are the sensors, which are also assessing location-based images.The senior scientist, who preferred anonymity, said what makes the 15 minutes “terrifying” is that the sensors’ ability to function in new temperature, gravity, and atmosphere. “The sensors have thus far been tested on ground conditions, but it should work as desired in space. A one-second delay can turn into a challenge.”

Weighing the success rate of such missions, Sivan earlier said, “Soft-landing on moon has a success rate of 37% (globally). However, we have learnt from their failures. That itself is a lesson. It brings valuable addition so we do not have a similar problem.”Earlier this year, Israel too used on-board sensors to help its lander land in an automated mode during the ill-fated Beresheet mission. “But one of the sensors failed and the lander crashed on to the lunar surface,” said the scientist.

ALSO READ | Chandrayaan 2: ISRO gears up for 'most terrifying' 15 minutes

Had the Beresheet mission completed a successful landing, Israel would have been the fourth country in the world to soft-land on the moon -- an achievement which India is eyeing right now.ISRO scientists, while describing the delicate nature of the Chandrayaan-2 mission, said even a small error could cost the entire mission.

For instance, if the lander makes a landing on an uneven surface on the moon, there is a possibility of Vikram toppling, which, in turn, would not only make it difficult for the rover Pragyan to roll out, but would also jeopardise the lander’s own experimental on-board payloads to carry out lunar surface-based experiments, the data of which is also eagerly awaited by US’ National Aeronautics and Space Administration (NASA). The US space agency is planning to land astronauts near the south pole by 2024 under an ambitious Artemis programme.

Now we are on Telegram too. Follow us for updates
TAGS
ISRO Chandrayaan 2 lander Vikram Chandrayaan