NEW DELHI: Amidst controversies surrounding the mid-day meal (MDM)scheme, government data has revealed that the number of children availing the facility has continuously gone down in the past few years. The scheme has seen a reduction of nearly 80 lakh children in last three years. 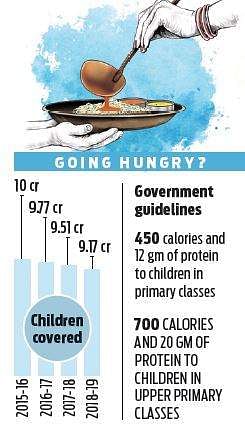 According to recent government data, more than 10 crore children were covered in 2015-16 which has gradually declined in last three years. The number came down to 9.17 crore during 2018-19.

Even after clear government guidelines on maintaining quality and quantity of meal served to the schoolchildren under the MDM scheme, reports of sub-standard meals, insufficient ingredients and irregularities to make undue profits have also come up including the recent incident of schoolchildren being served just rotis with salt as a meal in UP’s Mirzapur.

Talking to a government school teachers in UP and Bihar revealed that often vegatables and pulses are missing from the food served. According to government data, a total of 70 complaints on misuse of foodgrains and irregularities under the scheme were reported from various states and union territories during the last three years.

Officials said that respective state governments and UT administrations were requested to furnish Action Taken Report (ATR) in the matter. As per ATRs received from States and UTs, action such as issuing warning against the official responsible, terminating the contract of concerned NGOs or organisations, initiating criminal proceedings and imposing penalties have been undertaken.

Government’s quality control measures
Schools are instructed to procure Agmark quality and branded items for preparation of mid day meals which must be tasted by 2-3 adult members of School Management Committee including at least one teacher, before being served to the children

Now we are on Telegram too. Follow us for updates
TAGS
midday meal scheme Samagra Shiksha