Chief Minister Trivendra Singh Rawat is personally monitoring the situation in the district as well as in other districts of the state where a cloudburst occurred on Saturday.

DEHRADUN: Over 1,500 pilgrims were stranded at various places after landslides blocked the Badrinath National Highway and 40 other routes in Uttarakhand’s Chamoli district following heavy rainfall on Saturday. 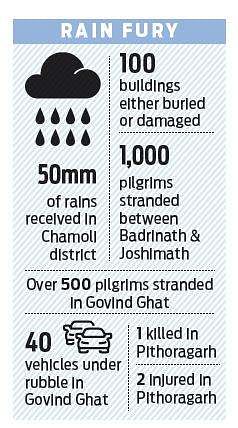 The pilgrims are caught midway even as work to clear the road is underway. On Saturday, a cloudburst occurred in Govind Ghat area, 20 km from Joshimath on the Badrinath National Highway, triggering heavy landslides in Gothiyama, Tooppaani and Karuna.

Chief Minister Trivendra Singh Rawat is personally monitoring the situation in the district as well as in other districts of the state where a cloudburst occurred on Saturday. “The CM has spoken to officials of Chamoli and Pithoragarh, who told him that relief work is going on at a full pace ensuring steady supply of essentials such as medicines and rations. Work is also on to clear the blocked roads as soon as possible,” Cabinet Minister Madan Kaushik said.

Now we are on Telegram too. Follow us for updates
TAGS
Uttarakhand rains Uttarakhand landslides