Delhi address for mother of all infections

The police also sealed the markaz and shifted around 1,100 people in buses to various quarantine centres in the city.

NEW DELHI: With the Tablighi Jamaat headquarters in Delhi becoming the biggest hotspot for coronavirus in India, the police on Tuesday registered an FIR against its head Maulana Saad, and other management staff for flouting orders against gatherings. At least 10 people who participated in the congregation in mid-March died after contracting the virus. Many others have tested positive and are under quarantine. Registering a case under various sections of the Epidemic Diseases Act that would entail a maximum punishment of two years, the police said the Crime Branch will handle the case.

The police also sealed the markaz and shifted around 1,100 people in buses to various quarantine centres in the city. In a strongly worded communication to police and other law enforcement agencies of all states, the Union home ministry said that after the 14-day quarantine, all foreign preachers who tested negative should be deported. Those testing positve will be hospitalised. 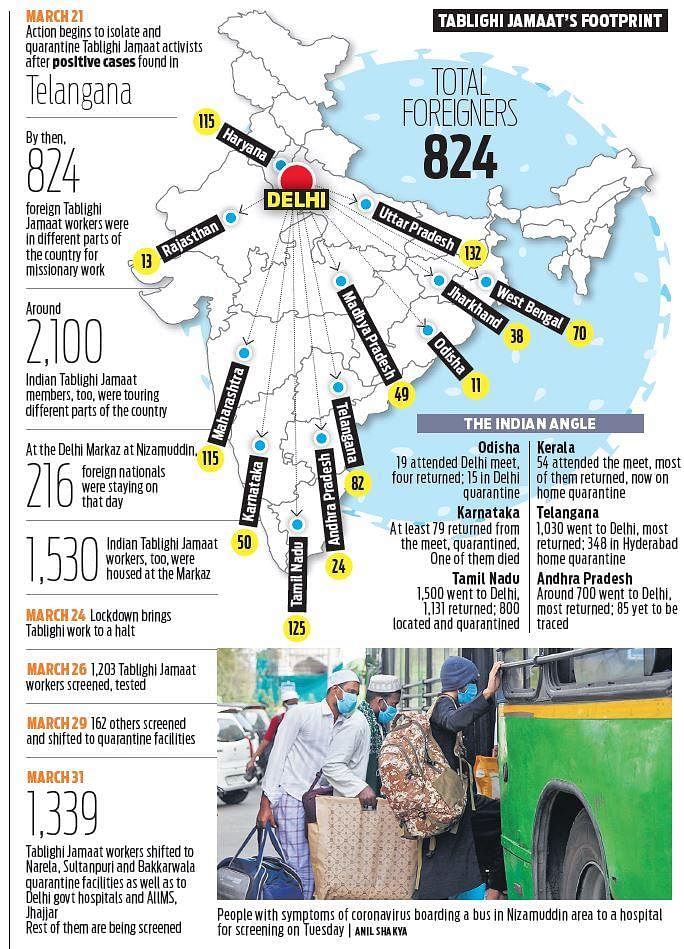 According to rules, foreigners need to get missionary visas for preaching activities. However, many foreign preachers were found to have come to India on tourist visas. MHA officials said violation of visa norms will not be tolerated. Delhi Chief Minister Arvind Kejriwal blamed the markaz management for the mess, “This was an absolutely irresponsible thing to do. Everyone is hearing about coronavirus and its impact. Gurdwaras, mosques, temples and churches all are vacant... At this time, having such a gathering was absolutely wrong,” he said.

The markaz management, however, claimed it had informed the authorities about the presence of more than 3,000 (including foreigners) and sought help in moving them out in time got no response. But the Delhi government pointed out that on March 16, it had capped the size of public gatherings at 50. Three days later, it reduced the figure to 20 and later brought it down to five.

Despite all these prohibitory orders, the jamaat management had about 3,000-4,000 people at the markaz. Of the over 300 from the markaz being tested on Tuesday, least 24 were found infected in one hospital. The results of about 200 others are still awaited.

Also, at least 50 people from Tamil Nadu and 11 from Andhra Pradesh with travel history of Delhi tested positive. In all, about 2,100 foreigners came to India for Tablighi activity since January.