Administration in districts bogged down by poor health infrastructure

District collectors list the challenges they face in dealing with corona crisis.

NEW DELHI: Poor state of health infrastructure, lack of adequate ventilators and Personal Protective Equipment for medical staff and doctors in district and sub-district hospitals, and a large migrant population have been highlighted as some of the major concerns by district collectors in the country in a survey carried out by the Department of Administrative Reforms and Public Grievances.

Two hundred and sixty-six IAS officers submitted their suggestions and views for the survey.  The COVID-19 preparedness survey identified the need for enhanced hospital preparedness in district/sub-district hospitals, with 40 per cent of officials responding that hospitals were adequately prepared. Nearly 50 per cent officers agreed that adequate number of isolation beds in district/sub-district hospitals were available. The non-availability of adequate ventilator machines was highlighted as an area of concern.
Nearly 92 per cent officers said people’s awareness about the pandemic threat is very high and 75 per cent said people are taking precautions to cope with it.

While 69 per cent respondents said people are handling the lockdown in a peaceful and orderly manner, 31 per cent said they  are alarmed and panicking.  Eighty-two per cent of the district collectors agreed that the government has taken sufficient steps to combat the disease management.  The officers have recommended formulating and issuing standard operating procedures and guidelines for inter-state movement of people and immediately addressing issues relating to procurement, logistics and supply chain for medical equipment. They have also suggested creat ing more testing centers and capabilities for all district/sub-district hospitals. 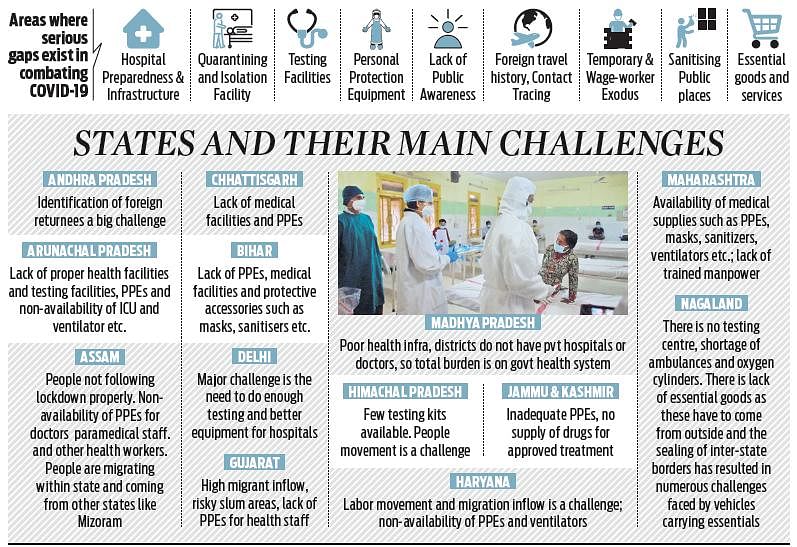 Stay up to date on all the latest Nation news with The New Indian Express App. Download now
TAGS
Coronavirus COVID 19 health infrastructure